How Viktoria Lipianska went from figure skating to Muay Thai 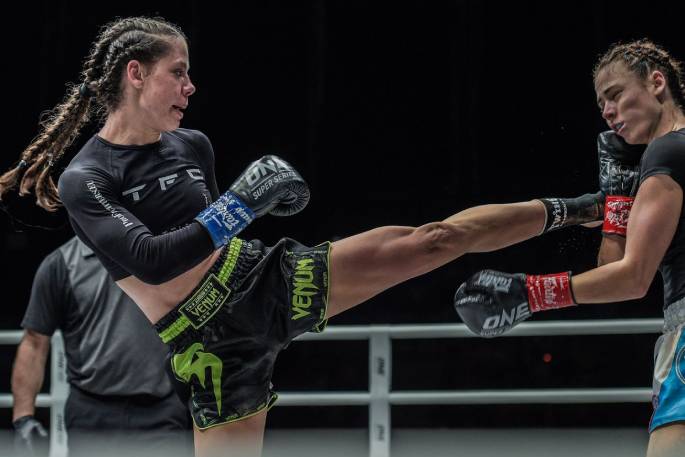 After injuries cut her life as a gymnast and figure skater short, Viktoria Lipianska was desperate to try another sport, but she never imagined what she would end up achieving in martial arts.

The Slovakian is still just 23, but she has a European championship and a pro-am Muay Thai World Title to her name, and following an impressive debut ONE Super Series win, she is taking aim at the gold in The Home Of Martial Arts.

As she prepares to return to the Circle, Lipianska reveals how she emerged from her small central European country to become one of the most talented young athletes in the world’s largest martial arts organisation.

Lipianska was born in the Slovak capital of Bratislava in 1996, but she spent much of her childhood moving around Europe with her mother, Alexandra, younger brother Lukas, and father, Jan Lipiansky, who was a professional ice hockey player.

She admits that transient lifestyle presented a few challenges, but it could also be rewarding.

“I was born in Bratislava and raised in Slovakia, but my dad was a professional ice hockey player so my childhood was full of moving from one place to another until he retired when I was 12 years old,” she explains.

“He played for teams in the Czech Republic, Sweden, Finland, and he was in America and Germany before, too. That was not easy for me as a child. I could not find friends easily because I was moving to new places and schools.

“But nowadays I’m so happy I went through this with my family and it was really fun. I got to meet a lot of amazing people who taught me a lot, and I got to travel a lot and see many places.”

The young Lipianska tried her hand at different sports that were more traditional for a young girl, but her chances of success were stopped when she suffered an injury.

“Sports were always in my life from when I was born. I saw sports every day, and I used to play with my brother and my father a lot,” she adds.

“When I was small, I did the girl things like gymnastics, ice skating, and figure skating, but when I was a teenager I injured my knee and couldn’t do any sports for a year. When it was better, I missed the active life a lot and I needed to start again.”

Lipianska decided she wanted to try something new when she recovered from her injury, and that led her to her local martial arts training center.

“It was actually my dad that brought me to the Thai boxing gym,” she offers.

“He was always into these kinds of sports. He would always watch them on TV, read articles about them, and he did boxing for physical activity in his off-season.”

The young Bratislavan was enamored with “the art of eight limbs” from day one. Despite her initial shortcomings, she stuck with it and used her weaknesses as fuel to improve and better herself.

“I loved this sport from the first training session, it was something really different, it was a different emotion, and I wanted to do it again,” Lipianska says.

“I remember my first time kicking the bag and it was awful, I felt so much pain and I did not understand how the other girls could kick the bag and not get hurt. Training was so hard, it was a huge challenge for me physically, but I wanted to go into it 100 percent. I wanted to do it again and again, and get better every day.”

“When I told her I was going to have my first fight, she was so scared. She was yelling at me, and she was screaming saying, ‘You’re not going to do this, it’s stupid, I won’t let you!’” she recalls.

“We argued a lot about this. I always told her, ‘Mom, I’m going to be 100 percent ready, don’t worry,’ but I’m her child so it’s natural that she wants to protect me.

“It was a year and four months [after I started training] when I had my first amateur fight. I was so excited and it all went so fast that I cannot remember anything from it, but when I stepped out of the ring I was so happy and the feeling motivated me to go again!”

Alexandra slowly started to see the dedication her eldest child had to her craft, and how she used it to better herself. Although she still struggles to watch her in combat, she now respects the choices her daughter has made and backs her all the way.

“My mom still doesn’t like to watch me fight, but now she’s like my number one fan,” adds Lipianska.

“She just wants to speak to me after my fights so I can tell her everything is okay. I think she’s fine with the fact that I do what I love and what makes me happy, and I am reaching my dreams. She really supports me, she helps me with everything. I would never have done this much without her standing by my side every time.”

-Read this story in full on ONEFC.com