Nikora Lee-Kingi once again King in the Ring 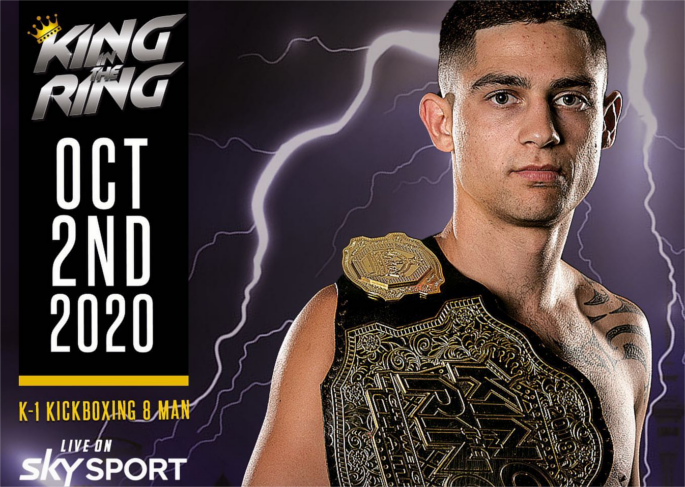 History was repeated tonight, as once again Lee Gar fighters Nikora Lee-Kingi and Dominic Reed conquered their respective pools to meet in the finale of the King in the Ring 62kg eight-man tournament. Again it was reigning champion Nikora Lee-Kingi who emerged victorious, this time by split decision.

The finale was razor-close, with Reed landing effective kicks and Lee-Kingi unloading his signature punch combinations. The fight could have gone either way, and if Dominic Reed had been given the decision it would not have been a robbery.

Both Reed and Lee-Kingi both stopped their quarter-final opponents in the first round by TKO. In the semi-finals, Reed brutalised the leg of Yassin Yass before stopping him with a body punch in round two. Lee-Kingi's semi-final was a gruelling three-round slugfest with David 'Sanchai' Aung which he took by unanimous decision.

Read Fight News' summary of the fights below.

Quarter-Final 1: Craig Hughes vs Dominic Reed
Dominic Reed put on a clinic as he stopped Craig Hughes in the first round. Reed controlled the range well, using his reach to great effect with kicks and straight punches and holding the centre ring.

Quarter-Final 2: Rasy Soth vs Yassin Yass
Yassin Yass used his footwork and a pinpoint right hand to defeat Rasy Soth by unanimous decision.
Both men were measured to start, trading leg kicks. Yass began to find a target for his punches, using slick footwork to avoid damage, while Thai stylist Soth struggled to find his range. Some hard right hands found the mark for Yass, likely winning him the first round.

Soth adjusted his gameplan in round 2, slowing things down and walking his opponent down. Yass used the teep to keep distance and snuck his right hand around the guard to find the target.

Soth came harder in the third round, blitzing forward as Yass used his footwork to stay away from the ropes. The right hand of Yass still found a home frequently, while Soth struggled to land any sustained offence.

MacDonald came out aggressive, landing kicks to the open side from the southpaw stance. In an exchange halfway through the first round, Lee-Kingi landed a brutal headkick which stiffened him up and sent him crashing backwards to the canvas.

Incredibly, MacDonald got back to his feet within a few seconds and the fight resumed. Lee-Kingi smelt blood, turning on the pressure and finding the headkick to floor MacDonald again late in the round for the TKO victory.

Guda blitzed with a couple of flurries early, while Aung was more reserved, finding his range. Aung landed a hard right hand a minute into round 1, using good footwork to avoid the lunging Guda. A hard right kick from Guda landed to the body with a minute to go. A close first round.

Aung appeared to have found his groove in the second, landing combination punches and some hard body kicks. Guda began to find a home for his long jab, but it was Aung who carried the momentum in the round.

Guda landed a nice leg kick early but was countered by a two-piece upstairs from Aung, who did a great job of negating the reach disadvantage by being either all the way in or all the way out. Guda fought hard and kept the pressure on but Aung increased his output as the round progressed, taking a clear decision win.

Reed held centre ring early, corralling Yass to the fence to unload punches. Halfway through the round, Reed drew the defence of Yass with punches before landing a slashing leg kick which crumpled him to the canvas. Yass' leg was visibly compromised and he spent the rest of the round as a southpaw.

Yass came out southpaw for round 2, again Reed held centre ring. With a minute to go, Reed caught the teep and crushed the body of Yass with a brutal right hand, crumpling him to the canvas unable to recover.

Aung started with pressure, bringing the fight to Lee-Kingi, who slung rapid-fire punches in return. Aung targeted the body kick with some success, but they were caught a couple of times by Lee-Kingi who countered effectively.

In round two Aung switched between stances early, again targeting the body kick. The hand speed of Lee-Kingi was telling, as he threw punches in combination on most exchanges. With a minute to go, Lee-Kingi stormed forward, pushing Aung to the ropes and landing a knee to the head followed by a barrage of punches.

Aung started the third strongly, taking the fight to Lee-Kingi and landing some solid punches. Lee-Kingi's footwork and head movement served him well, still throwing in combination and angling off, keeping a high output til the final bell.

Tournament Final: Dominic Reed vs Nikora Lee-Kingi
Reed took centre ring early, both measuring each other as they traded leg kicks. Reed found a home for the outside leg kick while Lee-Kingi threw rapid punches upstairs. Lee-Kingi landed the cleaner punches while Reed landed the more impactful kicks in round one. A hard one to judge.

Reed again went to work with the kicks in round two, landing to the leg with frequency. Each time the distance closed, though, Lee-Kingi unloaded with machine-gun punches, not giving an inch of ground, though his output had slowed since the first.

The third round saw Reed increase his output, with accurate punches finding their target as Lee-Kingi appeared to fatigue. The pace never slowed, though, and it was fireworks from bell to bell, both men dealing damage until the finish.

Tournament Reserve Fight:
The first fight of the night saw CKB's Eden Phillips meet Siam Pitbull's Tyler Heldey in the tournament reserve fight. The pressure and volume of Hedley saw him rack up points early. Both men bloodied in the final round, they threw down with wild abandon, thudding punches into each other's heads. Tyler Hedley won the bout by unanimous decision.