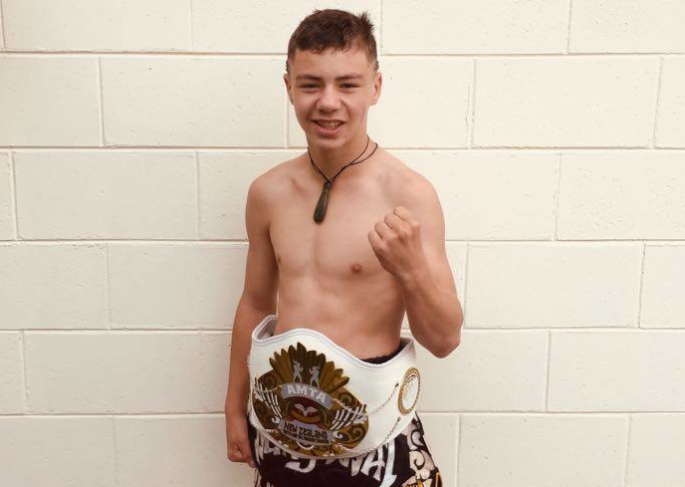 It was a competitive, technical fight over five rounds of two minutes, in which Foster put money in the bank early with heavy leg kicks set up by punch combinations. The technique showed by both fighters was impressive.

The fight was at 62kg, with both boys wearing padded shins and 10oz gloves, with no knees or elbows to the head allowed.

"Simba" Treggo fought like a lion, keeping the pressure on and seemingly unaffected by the outside leg kicks of Foster, who used crisp boxing and feints to set them up. When the distance closed, mostly it was Foster who took the advantage, slamming his opponent to the canvas several times.

After five rounds it went to the judges and a new AMTA New Zealand youth champion was crowned: AJ Foster. Both of these young men are a credit to their trainers and are the future of New Zealand kickboxing. Watch the fight here.

The rest of the fight results are given below, with the links to video in the rule-set descriptions:

MTC's Avery Gordon withstood the storm of Cyrus Carroll, using a tight defense and employing his kick and clinch game in a hotly-contested bout. Both traded knees in the clinch and it was Carroll who largely pressed the action, but Gordon's defensive ringcraft saw him avoid most damage, landing his own hard kicks from southpaw stance and taking the win.

This was a battle of pitbull versus snake, as the aggressive George blitzed with punches to close distance on her much taller opponent, entering the clinch and slamming her to the canvas many times.

Taha fought from the outside, with teeps and body kicks scoring points and earning her the win.

The best fight performance went to Felicity Snowdon as she displayed her timing and aggression to shut down Holly Crawford over three rounds. From the outset, Snowdon took the fight to her opponent.

Once Crawford had felt the punches and kicks landing, she became more cautious, while Snowdon turned up the pressure, winning the exchanges with volume strikes and taking a clear decision victory.

Both scrappy lasses, they traded knees in the clinch and kicks from the outside. A competitive match, but Barnhart's conditioning and reach advantage were put to good effect, keeping the pressure on Bennetts over all three rounds to take a clear decision win.

Caleb Brash and Zane Nuttall both put on a gritty performance in a three-round war. The southpaw Brash took the lead early, staring down Nuttall with shark eyes as he set up power kicks.

Nuttall found his range later in the fight, landing a liver shot which saw Brash grimace in pain but not flinch. The early work done by Brash was enough to win him the fight on two of the three judges' cards.

Shai Levin showed his full skill-set as he took apart tough brawler Abe Young over three rounds of action. Young came to fight, with heavy hands and forward pressure, but Levin managed to avoid most damage, scoring in return with heavy body kicks and stabbing elbows in the clinch. This culminated in the third round, as Levin scored a pair of knockdowns on a tiring Young. The fight went the distance, but a decisive victory for Levin.

"Soul Train" implemented an effective game plan to defeat Carroll over three rounds. Carroll clearly wanted to throw head strikes, the hesitation giving Heke the opportunity to unload his offense. Carroll threw kicks with great technique, but the shorter Heke repeatedly caught them and dumped him to the canvas, building up a points lead. An impressive win for the 11-year-old.

MTC's Stuart showed patience and accuracy as he defeated Justin Howland over three rounds. Howland was aggressive, setting up his knees and kicks with punch combinations but leaving his hands low afterwards. Stuart took full advantage of this, finding a home for a heavy right hand which staggered his opponent several times.