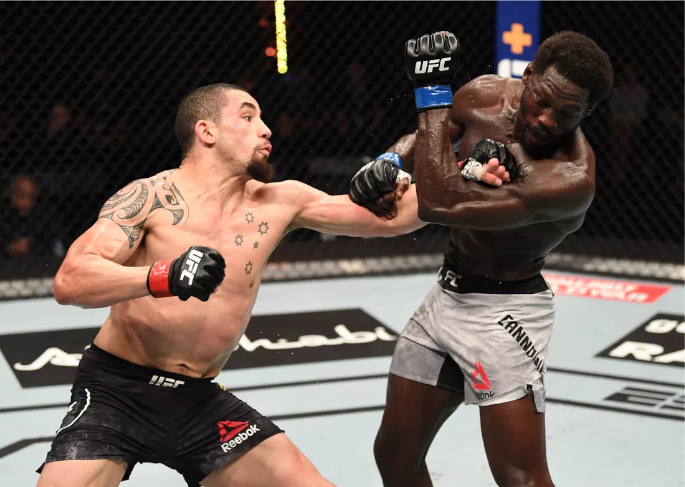 Robert "the Reaper" Whittaker silenced the doubters yesterday at UFC 254 with an emphatic victory over number two-ranked middleweight Jared Cannonier.

The win marks Whittaker's second in a row since losing the middleweight title to Israel Adesanya at UFC 243 in October 2019.

At UFC 254 on October 25, Whittaker shut down the offense of power-puncher Cannonier with pressure and a sharp 1-2. Cannonier landed some kicks which reddened the leg of Whittaker, but the damage was not evident and Whittaker kept moving well.

Whittaker kept throwing a 1-2 to right high kick combo, which eventually found its mark in round three, staggering Cannonier. As he stumbled, Cannonier face-planted to the canvas amidst Whittaker's follow-up pressure.

Amazingly, Cannonier managed to regain his feet and land some hard shots to Whittaker in return, but the damage was done, with Whittaker taking a unanimous decision victory of 29-28 over all three judges' scorecards.

While many pundits immediately speculated about Whittaker's next shot at Middleweight Champion Israel Adesanya, Whittaker was cagey when asked about his next fight.

At the post-fight press conference, when asked whether Adesanya was next on his list, Whittaker stated:

"Yeah, I mean, he's a tough fight, man. I'm not stoked to fight him. He's a hard fight, he's so good and he only looked better in his last fight, haha.

"And he beat me once already. But, I feel like I have a couple of tricks I can roll out, I can play it differently next time."

When asked about the timeline of his next fight, Whittaker stated:

"March/April. I've got Christmas, then the newborn [due] in January. I don't want to be thinking about a fight in the leadup to my newborn.

"With all of my kids, I've been thinking about fights. I've had my mind elsewhere and I refuse to do that for this one."

"My plans are: Christmas, my baby, and then hopefully our timelines [Whittaker and Adesanya] line up then."