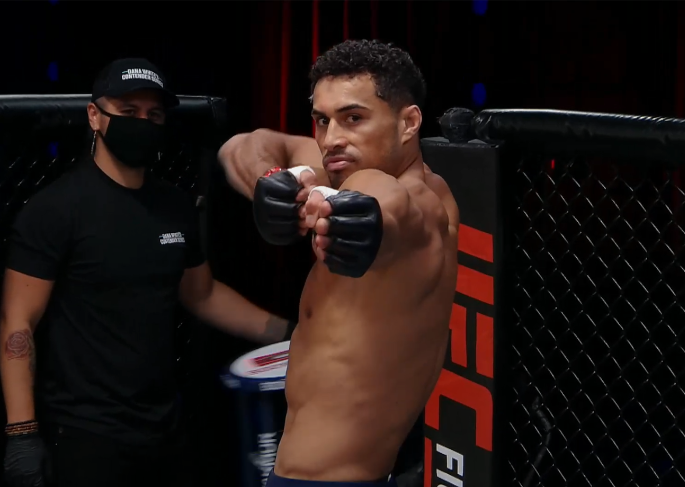 The fight was solely contested on the feet, with commentator Michael Bisping stating that he thought it was pretty well-matched in the early stages. Oliviera certainly came to fight, but got more than he bargained for.

Just before the two-minute mark, Ulberg slipped the jab of the advancing Oliviera, countering with his own left hook and right hand which dropped Oliviera face-first to the canvas. Referee Herb Dean called the fight, awarding the KO to Ulberg at 2:02 of the first round.

After the fight, Ulberg was asked about how he was feeling:

"I'm privileged. It's an amazing feeling. We just got back from Abu Dhabi and I got the call-up. I'm feeling privileged and happy to be here."

Asked about how quickly he'd like to fight in the UFC, Ulberg stated:

"As quick as I can. But what I definitely need to do is go back home, improve myself, focus on my ground game and my MMA game.

"Now that I'm in the UFC, I can focus and improve a lot of my game."

Ulberg versus Oliviera was the headlining bout of episode eight, season four of Dana White's Contender Series (DWCS). The previous three winners were all granted UFC contracts after likewise finishing their opponents.

This season of DWCS has yielded the highest percentage of contract winners yet, with 30/38 of the fight winners also gaining a UFC contract.

Ulberg's CKB team-mate and cornerman Israel Adesanya predicted an Ulberg finish. In an interview with Laura Sanko before the fight, Adesanya had the following to say about Carlos Ulberg.

"There's more than meets the eye, with Carlos...

The other results from DWCS Season 4, Episode 8 are below: