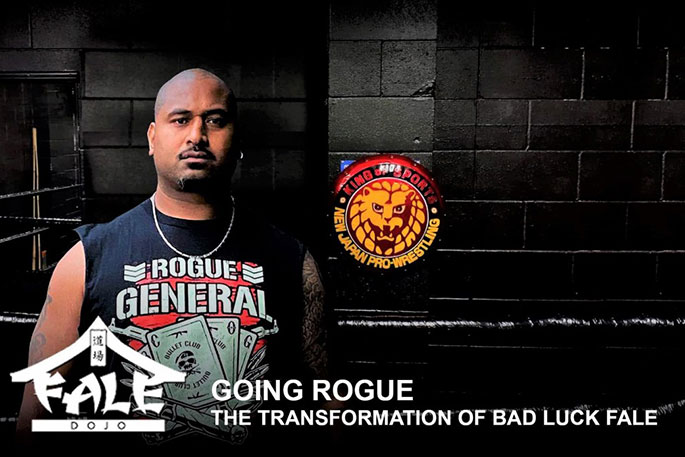 Previous to this, Fale underwent two years of intense and vigorous training at the world-renowned NJPW Dojo, during which time he immersed himself in the Japanese culture; becoming fluent in the language as well as the Japanese strong style of professional wrestling. Fale emerged as the first non-Japanese graduate of the NJPW Dojo.

This accolade impressed the NJPW brass which earned Fale much respect, and as such, Fale from that point on was no longer seen as a ‘foreigner’ but regarded as one of the Japanese.

Fale’s decade long journey has had some significant milestones. One of which was the creation of the Fale Dojo professional wrestling training facility.

Established in South Auckland, 2016 as an affiliate of the NJPW Dojo, the curriculum was mirrored off the New Japan training system.

Students have since come from all over the world to train under Fale and his coaching staff. 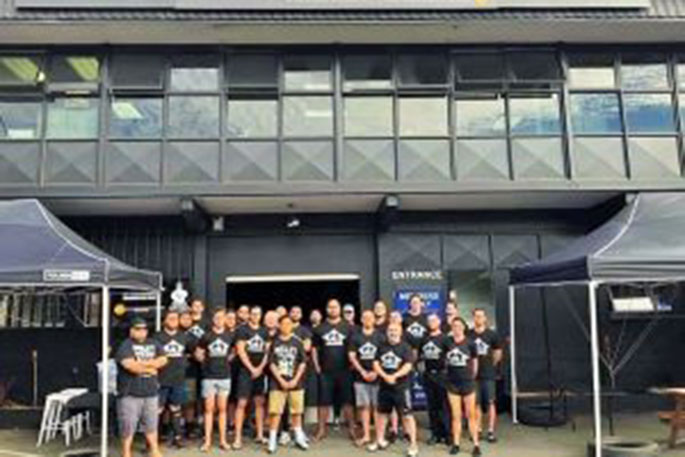 Fale stands proudly with his staff and students of the Fale Dojo before the first ‘Exhibition’ event – March 2019.

“I based Fale Dojo in south Auckland so that the young locals would have the same opportunities that I had,” said Fale, the founder, and Head Trainer of the Dojo’s three-month professional wrestling course. “I wanted to present our community a pathway for those who don’t play other sports such as rugby or netball.”

Another notable event for Fale Dojo happened on February 2020 when it became an official part of the NJPW training system and was rebranded NJPW New Zealand Dojo. However, while plans were in place to expand the Dojo which included an NJPW tryout in May, the COVID global pandemic disrupted this next phase. NZ’s border closures also meant that Fale could not travel to Japan to wrestle.

“Eight months is the longest I’ve stayed in New Zealand since I started wrestling,” Fale noted, as he alluded to feeling homesick for his home away from home.

“I miss Japan and the people. I miss travelling, I’ve become so used to flying back and forth every month, and fitting into two different time zones and cultures.”

Fale Dojo’s three-month course continued right through the year, despite the disruptions caused by COVID. This allowed the young lions the space to seek Fale’s full, undivided attention. Furthermore, it was also a timely opportunity for Fale to pursue some important matters that he wouldn’t normally, due to his busy schedule, though these matters were not always for business purposes. 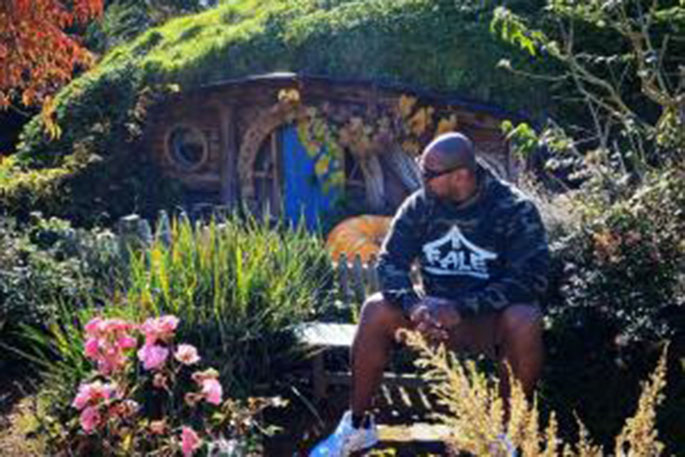 Fale enjoying the sights at the Hobbiton movie set.

“I’ve been exploring ways on how we can further expand Fale Dojo both locally and abroad,” Fale shared. “We want to build our presence on top of the goals that were achieved before we went into lockdown in March when we invited more trainers to join our staff and announced our sponsorship deal with Coca-Cola.”

Fale continued: “I spent time relaxing and building new relationships, hanging out with my parents and family, and getting to know the Dojo staff a little better. I also enjoyed visiting other parts of New Zealand.”

In addition to Fale’s activities, his incredible journey to transform his build was a massive undertaking which he shared openly. 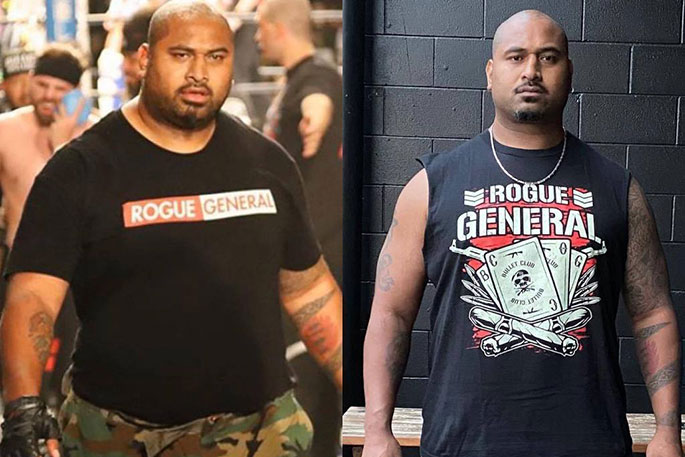 “I started my training back in March. I reached a point where it was very painful for me to walk,” he revealed. “My back and knees were in constant pain. Overall, I wasn’t happy with what I was eating, and I wasn’t happy with how I felt and looked.”

Fale explained: “I had the facilities and I knew the right people, so I thought that I would make use of the time and resources.”

“With the help of the Dojo trainers, we put together a solid workout regime and nutrition plan,” he said. “I could focus without interruptions while getting into some heavy fitness and combat training that wasn’t limited to pro wrestling.” 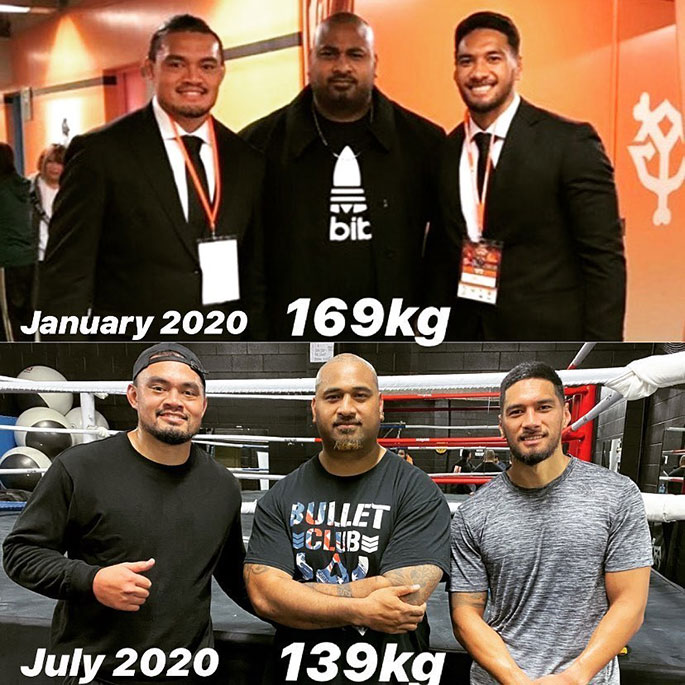 Fale uploaded videos of his workouts and ‘before and after’ photos of his 6 foot 4 build which revealed his 30-kilogramme weight loss. Fale inspired many locals to follow their journeys and register for the same classes at Fale Dojo that he attended as part of his workout plan.

“It’s been a very challenging journey, especially while having to change the way I eat,” Fale stated. “Adjusting to a better diet was my biggest obstacle, but it was also the biggest factor that affected my weight loss.”

While reflecting on the last 10 years, Fale touched on some of the key events in his career.

“10 years as a professional wrestler – it doesn’t feel like a long time,” Fale reflected. “It feels like it was yesterday that I debuted, it hasn’t been easy.”

“One highlight that sticks out for me was, of course, the formation of Bullet Club,” said Fale, who is a founder and senior member of Bullet Club, the longest-running faction.

“I’m grateful to some of the guys who I’ve worked alongside and learned from throughout the years,” he added. “Seeing those who I used to work with achieve goals in other places has made me more motivated.”

Since his debut in April 2010, Toks Fale has exemplified ‘going rogue’ and through his journey has very much become a pioneer.

He took the unconventional approach of being the first non-Japanese to graduate from the NJPW Dojo and created Fale Dojo; the first affiliate of its kind in his South Auckland community that has grown into an international destination.

As a wrestling personality and staple member of Bullet Club, Fale has helped reshape professional wrestling across the globe, enabling past members to acknowledge their connections to Bullet Club whilst working for other wrestling promotions.

Fale promises that the next decade will bring him and Fale Dojo / NJPW New Zealand Dojo greater success.

Fale’s return to the front lines of New Japan Pro-Wrestling on December 4 at the 2020 World Tag League will be a catalyst of this.

“I can’t wait to get back to Japan,” said Fale. “I miss seeing the guys and being in front of people. I miss the physicality that comes with being a New Japan pro wrestler.”

“The last decade was just the beginning – although it was a huge struggle, to me, it was well worth it,” the ‘Rogue General’ concluded. “The next 10 years is going to be huge!”