Stirling performance from Navajo, the new 92kg King in the Ring 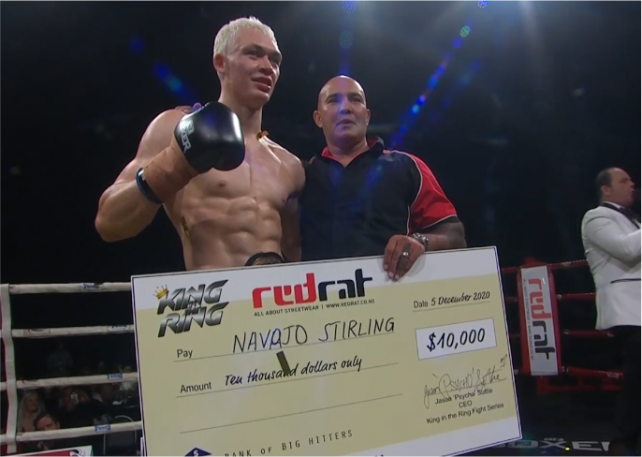 In his path to the final, 23-year-old Stirling took out Jason King via dominant decision in the quarter-final, before stopping Robert Ngari-Dean with body shots at the end of the first round in the semi-final.

In the tournament finale, he defeated nine-tournament veteran Nato "Hard Knox" La'auli, a King in the Ring finalist in 2013, 2017, and 2018. Stirling dominated the fight, forcing La'auli into the corner two minutes in and dropping him with a barrage of punches.

Stirling was masterful with his shot selection, keeping La'auli guessing with a changing rhythm and angle changes, dishing out punishment over nine minutes to become the new King in the Ring super cruiserweight champion.

Fight News' summary of the night's fights is given below:

Ngari-Dean established himself early, backing up Haliu with punch combinations and ending each with a kick before sliding back out of danger. In the second round Haliu found his range, walking Ngari-Dean down to unload power punches. Ngari-Dean kept a ferocious output over three rounds to take the victory on two of the three judges' scorecards.

Navajo Stirling imposed his will on Jason King over three rounds in a decisive victory. Stirling took the centre early, blasting King with a two-punch combination which dropped him for an 8-count a minute into the first. From there, Stirling kept the pressure on without risking himself pursuing the knockout, controlling the range well to take a clear win on the judges' cards.

Unesi started as the aggressor, leading with a left hook and throwing low kicks into the check of Rowston, who showed good defensive ringcraft to unload a few clean shots towards the end of the first. Rowston found his range in the second, landing low kicks and some clean punches amidst the constant pressure of Unesi.

Rowston poured it on in the third, using a crisp 1-2 and landing knees when the distance closed. Unesi fought like a lion, but Rowston was on fire, accurate punches peppering through the guard and forcing the 8-count, after which the fight was called off.

La'auli came forward looking for the southpaw power kick and overhand left. Tutone showed adept timing off the back foot, throwing punches in bunches and crashing kicks into the guard. Tutone kept up a high pace in the second despite a depleted gas tank, avoiding the murderous power shots of La'auli to unload his own volume punches and rack up points.

In the third, Tutone was clearly exhausted, letting himself be corralled into the corner by La'auli who dropped him with a liver shot for the 8-count. The judges scored the fight a majority draw and a fourth round was announced.

La'auli targeted the liver in the fourth, finding the target early with a kick which saw Tutone double over in pain. La'auli swiftly followed up with punches and knees, crumpling Tutone to the canvas unable to answer the 8-count.

The taller Stirling controlled the fight, keeping Ngari-Dean at kicking range and on the end of his straight punches. Late in the round, Stirling landed a body kick which visibly hurt Ngari-Dean, after which Stirling followed up with a flurry of punches and a knee which saw Ngari-Dean floored in his corner for the 8-count at the end of the round.

Ngari-Dean was clearly injured and his corner called off the fight between rounds, leaving Stirling to advance to the tournament final.

Rowston showed excellent footwork against the more heavily-muscled La'auli, using teeps and crisp punches to score points early. After getting out-landed in the first, La'auli came out more aggressive in the second, but Rowston again used his footwork and head movement to avoid most damage, feinting with the knee to setup accurate punches.

In the third round, Rowston showed more of the same, peppering La'auli with the jab and angling out to avoid damage. On one of these angle changes, La'auli spun into a brutal backfist which caught Rowston cold, sending him crashing backwards to the canvas unable to answer the 8-count.

Stirling kept the larger man on the end of his punches and kicks, backing him up and imposing his will. Stirling varied his shot selection, landing punches and knees off his front kick, blitzing La'auli and forcing him back into the corner to unleash a barrage of punches, dropping him for an 8-count with less than a minute to go in the first.

La'auli seemed wary of Stirling's power in the second, being more tentative with his offense. Stirling stayed composed, using the teep to keep distance and crashing high kicks into the guard, staggering La'auli. The second round was all Stirling but he didn't risk himself going too hard for the finish.

Stirling kept up his varied offense in the third, not letting La'auli get a read on his rhythm. A minute into the round, Stirling landed a hard right hand followed by a right headkick, again causing La'auli to lose a step. The toughness of La'auli cannot be overstated, as he endured all of the punishment to make it to the final bell.

In the lone professional boxing fight of the night, Shiva "Showtime" Mishra demolished Aung Sanda in the first round, fighting behind his jab and landing a crushing right uppercut which dropped Sanda 90 seconds into the fight.

After the 8-count, Mishra threw caution to the wind, unloading power shots and again finding a home for the right uppercut and a follow-up left hook, crumpling Sanda to the canvas again. The referee had seen enough, waving the fight off. A dominant victory for Mishra.

Parsons-Grace targeted the right headkick early, hiding it behind punch combinations and setting a high pace. Mechkov came forward as always, but Parsons-Grace used the teep well and reddened Mechkov's leg with several hard right kicks in the first round.

Mechkov came hard in the second, blitzing forward and targeting the left body rip. Parsons-Grace looked for the left knee as Mechkov entered, clinching with the double collar tie when they came together. A close round.

Mechkov's best round came in the third, landing in combination and keeping the pressure on. With 10 seconds to go, Mechkov landed a crushing right hand which staggered Parsons-Grace. The judges' scorecards had it 29-28, 28-29, 29-29 - a draw.

Audrey Guyet unleashed a wave of constant attacks on Lola Ferber, punching into range and ending her combinations with low kicks. Ferber looked for kicks and knees but was out-worked by the pugnacious Guyet who took the unanimous decision win.

After a fiery first round, southpaw Josh Wood began to impose his pressure game against Haylin, timing his counter-punches and keeping him on the back foot to take a unanimous decision victory.