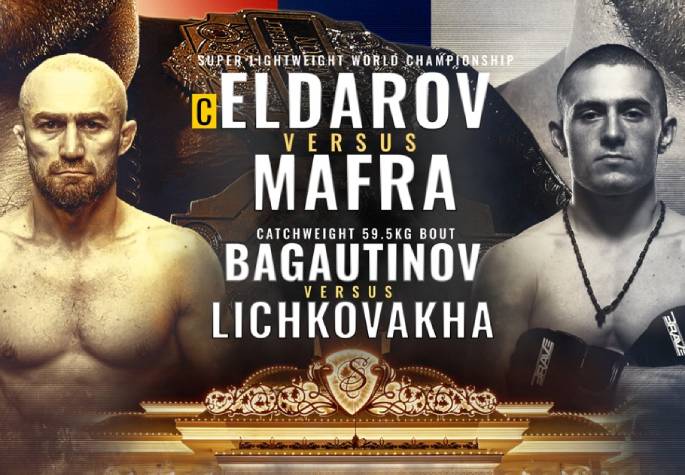 Some of the biggest names in MMA are expected to step into the ring for BRAVE CF 46.

The thrill of the upcoming BRAVE CF 46 has edged closer as the promotion has released its official poster.

Main event fighters Eldar Eldarov, Leonardo Mafra, as well as co-headliners Ali Bagautinov and Oleg Lichkovakha, are featured in the poster for the January 16 show - which takes place in a partnership with Krepost Selection, the fastest-growing MMA organisation will land in Russia for the first time.

The excitement and anticipation for the card has reached a fever pitch as the official poster has dropped, says a spokesperson for the international promotion.

Eldar Eldarov is set to defend his title against Brazil’s Leonardo Mafra on the night.

"The champion will face the greatest challenge of his career when he faces the Brazilian powerhouse who is fighting out of one of the most accoladed camps in the world, King’s MMA, in California (USA), under the mentorship of master Rafael Cordeiro.

"Mafra himself feels he's in the prime of his career and ready to deal with the many problems Eldar Eldarov will provide when the two of them meet. He's ready to dominate in his natural weight-class, the recently-introduced Super Lightweight, which is a midway between Lightweight and Welterweight. "

Elsewhere Grappling legend Rustam Chsiev will take on Gamzat Khiramagomedov. ‘’The Russian Bear’’ will try to get his second win in a row on the back of his most recent win against Tarek Suleiman in his last fight at BRAVE CF 27. The card also features Roman Bogatov who will face Nurzhan Akishev.

"Other fighters on the card include Kyrgizstan star Abdysalam Uulu Kubanychbek, who faces Jahongir Saidjamolov, and one of the biggest prospects in MMA Murtaza Talha who will face Dmitriy Krivulets.

"The card also features a heavyweight bout between Konstantin Erokhin and Zhyrgalbek Chomonov, and Murad Bilarov's fight against Fedor Babich."