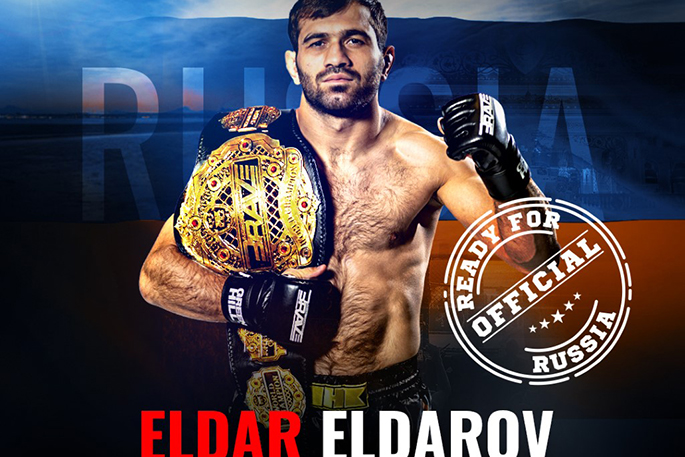 Russian-born, Bahrain-based Eldar Eldarov is described as one of the most influential Mixed Martial Arts figures.

His partnership with some of the biggest names coming out of the region was succeeded by Eldarov paving his own way, through the Middle East, and becoming an icon for both areas.

As he heads to Sochi, at BRAVE CF 46, to defend his Super Lightweight world title for the very first time, his influence in the mixed martial arts community of both areas cannot be overstated.

Eldarov was born in Dagestan, and followed the natural steps of being enrolled in sports at a young age, something he says was crucial in his development as a martial artist.

‘’In Dagestan, they don’t ask if your son is practicing sports, they ask which sport is your son practicing. Every kid does sports, it’s the way it is. I was lucky enough to start my martial arts journey very early in life," said Eldarov in a previous interview.

He was then involved with a multitude of martial arts before settling for MMA - following a traumatic leg break that robbed him of a gold medal in the Sambo world cup.

As time went on, he was invited to join KHK MMA as a coach and now represents the team in addition to serving as the head coach.

He has also been instrumental in opening up the doors to several young Russian fighters at KHK Dagestan, which has made him a leading figure in the region.

But, as much as his time associated to Russian olympics and Mixed Martial Arts greats had been prolific in achievements, Eldar’s great leap came when he found himself as a mentor and a leader, coaching the Bahrain national team ahead of the IMMAF amateur competitions.

It was the perfect combination of experience and practical knowledge, something always really appreciated by the youngsters, with a natural talent for leadership and mentoring, which led the Bahrain national team to the number one spot worldwide in the IMMAF rankings.

But Eldarov was never satisfied with being one of the top athletes in the world or coaching the best MMA national team globally, with the mentality of a true warrior who wants to succeed in both areas.

Against Leonardo Mafra, in the main event of BRAVE CF 46, Eldarov knows that he has yet another chance to lead by example and, at the same time, keep doing what he loves and does best.

The fastest-growing organization’s first trip to Russia will take place on January 16th, in association with Krepost Selection. A who’s who of Russian and international MMA fighters are expected to be involved, with the likes of Ali Bagautinov, Roman Bogatov, and Abdisalam Kubanychbek, all confirmed for action.