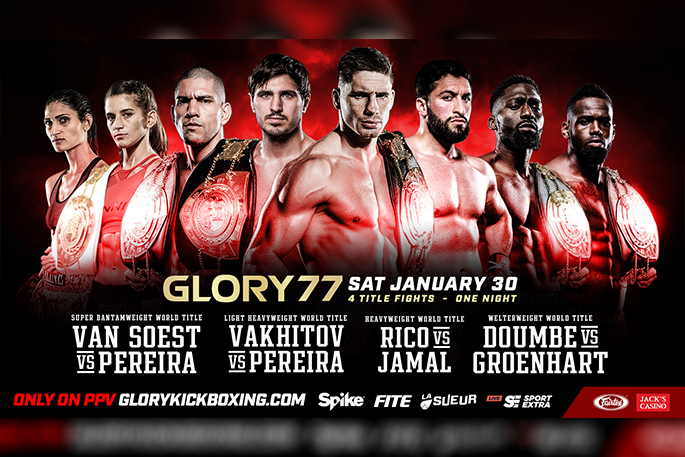 GLORY kicks off the new year with a truly exceptional fight card for GLORY 77: six champions and four title fights all taking place in one night that will go down in history.

The main event of GLORY 77 is headlined by one of the most exciting trilogy matches in combat sports between GLORY heavyweight champion Rico Verhoeven (56-10-0, 17 KO, The Netherlands) and the No. 1 ranked heavyweight contender Jamal Ben Saddik (35-7-0, 28 KO, Morocco).

In the light heavyweight division, the undisputed GLORY championship is on the line when defending champion Artem Vakhitov (21-5-0, 8 KO, Russia) and interim champion Alex Pereira (32-6-0, 21 KO, Brazil) face off.

Currently the GLORY middleweight champion, Alex Pereira has the opportunity to become the first champion in GLORY’s history to reign over two weight divisions at the same time.

"As we continue our transition towards pay-per-view and building the future of our sport, GLORY will soon announce the launch of new online pay-per-view platforms for GLORY 77," says a statement on the GLORY website.

"GLORY fans will be able to watch the first pay-per-view event of 2021 on GLORY channels and via our official distribution partners Spike, La Sueur, FITE and SportExtra."

The preliminary event is headlined by a clash of heavyweight newcomers. Raul Catinas (41-6-0, 33 KO, Romania) and Martin Pacas (42-10-0, 10 KO, Slovakia) battle it out for their first time in the GLORY ring. Finally, French lightweight Guerric Billet (32-4-0, 14 KO, France) looks to secure his second consecutive GLORY win when he meets No. 5 ranked contender Itay Gershon (17-5-0, 6 KO, Israel) who holds a 4-1 record in GLORY.