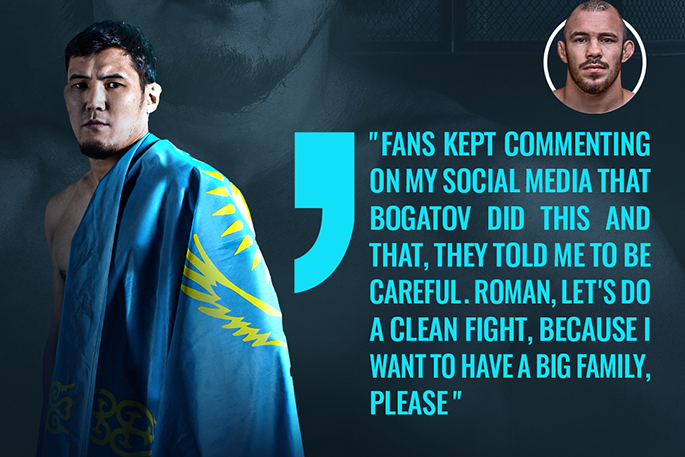 It seems Nurzhan Akishev is finding humor ahead of his BRAVE Combat Federation debut.

The Kazakhstan standout is set to take on Roman Bogatov at BRAVE CF 46, on January 16, the first time the fastest-growing organisation in the world will land in Russia for a show.

And Akishev seems set on stirring the controversy pot against his opponent. In his last fight, Bogatov was repeatedly warned and had points taken away from him for low blows that included strikes to the groin of his opponent.

‘’The Bizon’’ is wary of Roman’s fame and has jokingly pleaded that his rival doesn’t repeat the same ‘’strategy’’ in their upcoming bout.

"I haven't watched Bogatov's last fight, but I know what happened. I think that I found out as soon as our fight was announced.

"Fans kept commenting on my social media that Bogatov did this and that, they told me to be careful with my balls (laughs). So, for me it's a big opportunity, but I have a message to Roman. Let's do a clean fight, because I want to have a big family, please," says Akishev.

Bizon also explained why he’s sometimes referred to as the ‘’Belt Hunter’’.

He has a large following in Kazakhstan, and has dominated the national scene for years, winning belts in two different organisations, before moving up to the big leagues at BRAVE CF.

‘’You know, my fans say that I’m the belt hunter, because everytime I have a title fight I win. And I’m sure my time will come at BRAVE Combat Federation, and I will win the belt there too’’.

Akishev vs Bogatov takes place in the main card of BRAVE CF 46, a show headlined by the returning world champion Eldar Eldarov.

He will defend his Super Lightweight crown against Leonardo Mafra, a world-class striker and the top contender from Brazil.

Also set to see action are some of the region’s biggest stars, such as Ali Bagautinov, Konstantin Erokhin, and Rustam Chsiev.