Volkanovski vs Ortega official for UFC 260 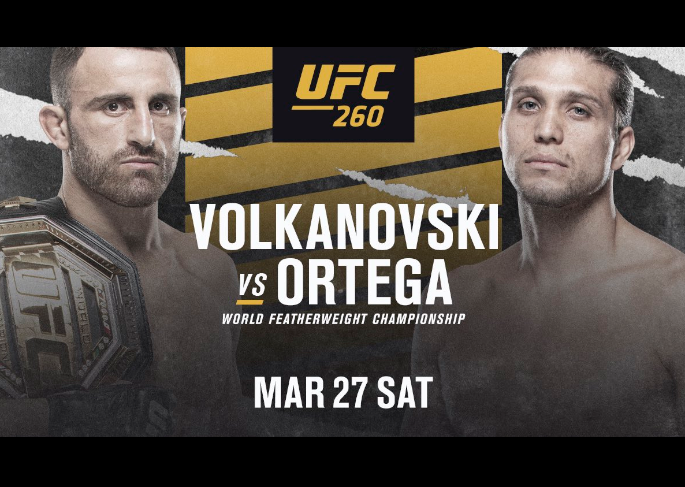 UFC 260 on March 28 has its main and co-main events booked, with the latter being a match up between featherweight champion Alexander Volkanovski and number two-ranked Brian Ortega.

Volkanovski (22-1) versus Ortega (15-1) is an interesting style match up, with the elite submission skills of Ortega being the x-factor. The two men have a common opponent in former 145lb king Max Holloway, who put a fourth-round TKO beatdown on Ortega in 2018 before losing twice (barely) to Volkanovski in 2019 and 2020.

MMA math only goes so far, though, and Ortega is a live underdog in this fight. The TAB have Volkanovski as a $1.49 favourite and Ortega as a $2.45 underdog at the time of writing this article.

Ortega's BJJ credentials are immaculate, being the prodigy of Rener Gracie and earning him the nickname 'T-City', in reference to his proclivity for triangle chokes. Ortega has seven submission wins in professional MMA - four by triangle, two by guillotine, and one by rear naked choke.

On paper, Volkanovski has the advantage in the striking department, landing 6.15 significant strikes per minute and absorbing 3.14, while Ortega lands just 4.07 per minute while absorbing 7.36 (stats from ufc.com).

However, Volkanovski finds most of his success by mixing his wrestling with his striking to open holes in his opponents' defenses. If he employs a wrestling-heavy gameplan in this fight, he might end up playing right into Ortega's game.

In Ortega's last fight, he destroyed number four-ranked Chang Sung Jung (the Korean Zombie) over five rounds and largely did it on the feet, landing 60% of his significant strike attempts while avoiding 62% of his opponent's strikes.

Whether this indicates a significant step-up in the striking ability of Ortega since his brutal loss to Holloway or a decline in the abilities of the Korean Zombie is unknown at this point, but on March 28 UFC fans will find out.