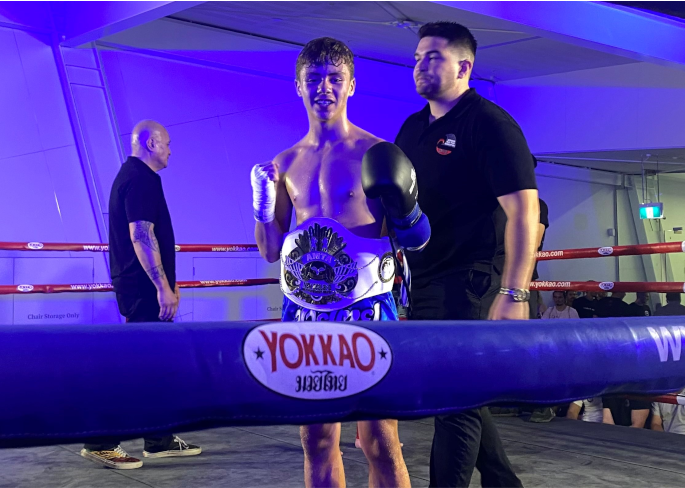 AJ Foster is a three-time New Zealand Muay Thai champion, at only 14 years of age. The Timaru resident has been training since nine years old.

Foster has a record of 5-2 and holds Aotearoa Muay Thai Association (AMTA) New Zealand titles in the 57kg and 63.5kg youth divisions. He previously held the Kiwiweight (48kg) NZ title but vacated it last year.

The most recent of these was the 57kg belt, which he won by defeating Invercargill’s Levi Smith at the Aftermath of Elbows fight show on March 27 in Christchurch.

Your title fight in March was your 3rd New Zealand title victory. How tough was Levi Smith to get a read on?

“He was pretty hard to pick up on for the first two rounds, but I picked up on him after a wee while.

Did you know he would use that karate/TKD stance or was it a surprise?

“I kinda knew he was gonna come out with it, because I was watching him warm up for a bit. I knew he had a Tae Kwondo / karate style.”

What was the gameplan going in, to kick the lead leg?

“My plan was to take out his right arm and his left leg. But it didn’t really go to plan, because he came out southpaw.”

You had control of most of the fight. Did the tornado kick in round 5 hurt you?

“Yeah, it hurt my head. It got my ears ringing for a bit.”

What started you on your Muay Thai journey?

“I started when I was nine. My sister started and I wanted to start, but she didn’t want me to. But Mum got me into it, and my sister stopped after a wee while.”

Do you enjoy the respect of your friends and people at school?

“Yeah, they always talk about it. Today I came into school and they were talking about it. I told some of the teachers.”

Tell me a bit about the training environment at Lucky 9 gym.

“I train pretty much every day apart from Thursdays. We run in our own time, and then come to the gym in the afternoons from about six til eight and train hard every day.”

I hear that there are some pretty stringent fitness requirements for fighters at Lucky 9.

Did you start out intending to fight, or was that just a by-product of getting good?

“I just started because I have a lot of energy, so it’s a good way to burn it. Then I got a fight, loved it, and just carried on.”

You currently compete in the youth division. Do you feel the urge to dip your toe in the adult division? When will that happen?

“I dunno. It’s pretty fun training with adults. There’s not many adults though, there’s more kids. I’m like the only boy; me and this other kid. The gym is kinda dominated by girls.”

How far do you want to take this? King in the Ring? Apex MTW Series?

“Yeah, hopefully go to the top. Be the best.”

How big is your dad? What division do you think you’ll end up in when you’re 20?

You’re defending your 63.5kg title in June. Who is your opponent?

“Journey Petero. I don’t know much about his style and I haven’t seen him fight. The show is in the North Island somewhere.”

Is there anyone you want to give a shout out to?

“Yeah, my sponsors at Lena Transport; Liam and Nadine. I’ve got a bank account which they put money into for my fight stuff.”

Thanks for the interview AJ. I look forward to seeing your next fight!