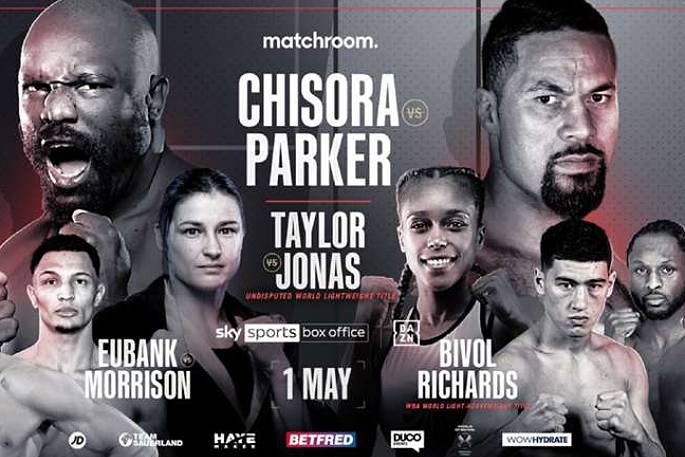 Two heavyweight contenders look for a way back into the world title picture, as Dereck Chisora and Joseph Parker go head-to-head on May 1.

The pair nearly fought a couple of years ago, but a spider but forced Parker to withdraw from the bout as he was feeling so unwell, reports DAZN News.

With both men looking to earn one final heavyweight title shot, they will look to boost their chances at the other's expense.

Parker's most recent fight was back in February when he took on fellow Kiwi Junior Fa in a scrappy bout in Auckland.

Parker walked away with the win.

Chisora, who has 32 wins to Parker's 28, last bout is reported to be back in October, when he came up short again Oleksandr Usyk.

In a recent video with Matchroom Boxing, Chisora says he is "bringing the pain" when he steps into the ring with Parker on May 1.

Chisora also talks about how he settles into life with new trainer Buddy McGirt. Del Boy discusses the previous fight pull out, what he does better than Joseph Parker and more, watch the video above.

Also planned for the fight card is Katie Taylor.

She will be defending her women's lightweight title against Natasha Jones.

The card takes place on Saturday, May 1, in Manchester, England starting at 7pm BST. That means the main card will begin at 4am AEST in the morning of Sunday, May 2.

In New Zealand, the card will stream on Spark Sport.