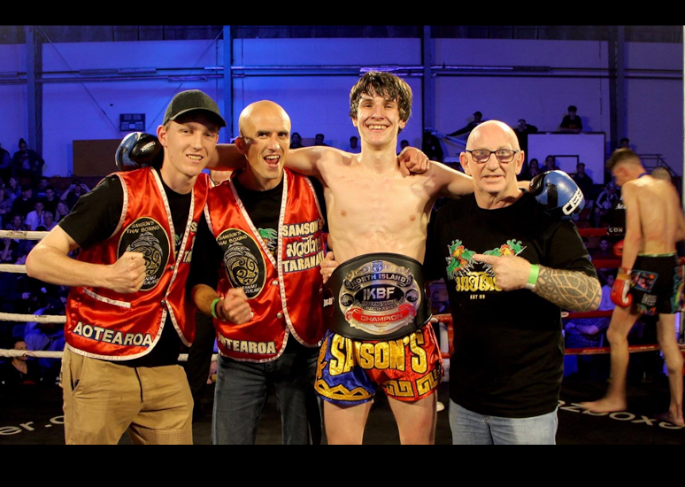 After only 3 years and 10 fights in the game, Schwitzer has already racked up the IKBF North Island 65kg title and has booked himself into the semi-finals of the renowned Apex Muay Thai Warrior 64kg tournament.

The event will be live-streamed on Fight News PPV.

Under the watchful eye of international Muay Thai referee and celebrated coach Chris Samson at Samson Muay Thai Systems, Travis plies his trade with a no-nonsense workhorse approach. Most recently Travis won his Apex Muay Thai Warrior quarterfinal with a vicious one-shot knee to the liver of Ale Tellez.

This Saturday, May 1, Travis will be battling it out against number one seed Ale Taumalolo for a spot in the final.

Fight News spoke to Travis ahead of this weekend’s big fight.

Hi Travis. We’re just a few days away from the Apex Muay Thai Warrior semi-finals, how has your training camp gone thus far?

“Gone good, feeling fit and strong. Been working on my strengths and my weaknesses, getting everything to a high level.

“I’ve been working on my boxing a little bit, getting my hands better, stronger, faster. Closing the distance working with my hands and also on my outside game.”

You are fighting the number one ranked Ale Taumalolo, how much do you know about him, have you seen him fight?

“Um yep, seen a bit of footage on him, few videos and that. We both [coach] talk about and research about opponents, sit down and go through it all together.”

You fight under Chris Samson, renowned Muay Thai trainer and international referee, how would you describe him as a coach?

“Couldn't ask for better. He goes through everything with you. He’s just so professional, he focuses on all the techniques, watches you closely, goes over all your training, everything you can think of.

“He leaves no stone unturned. That’s why I think I’ve gotten to this level so fast, it’s because of the way we train; it’s one-on-one personal training.”

You have been training for three years now, what was it that got you into Muay Thai? Did you always want to fight?

“I’ve always just liked combat sports, I started watching videos on Youtube and just loved it. I look up to all the Thai legends like Saenchai, Buakaw, all the older legends from the golden era of Muay Thai. There’s so many to name, basically all the Thai fighters.”

What is the fight scene like in your hometown of New Plymouth? Do you ever travel to mix it up with other sparring partners?

“We do a bit of travel, there’s not too much around here, a few gyms have closed down. We go to Hamilton quite a lot and get some sparring in at Tihipuke Muay Thai, Darryl’s gym.

“There are a lot of good guys down there like Jesse Morrow-Wilson, sparring him is pretty fun.”

In your quarterfinal match you stopped Ale Tellez with a knee to the liver, did you expect to win so decisively?

“I didn’t think I’d win it so quickly, but we noticed that he throws a lot of spinning elbows, he grazed me with one. As he spun around to throw another, I just saw the opening and went for the knee.” 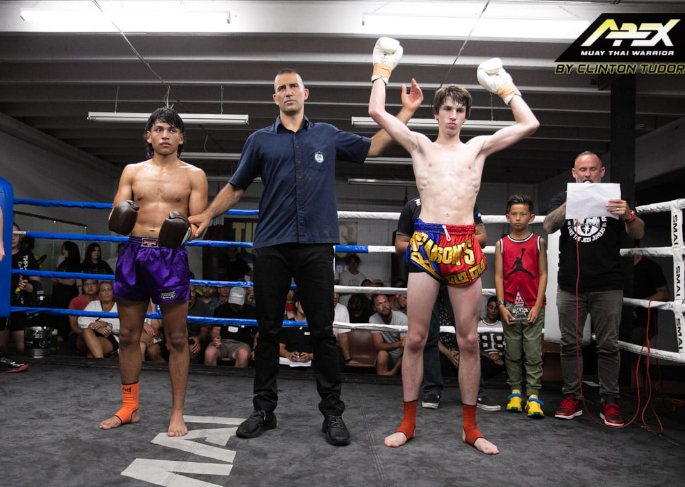 Is that something you worked on in training?

“Yeah, we knew that he likes to throw the spinning elbow so we worked on it in the lead up to the fight.”

Do you have a go to cheat meal or victory meal after a win?

“Oh, nah not really, just eat a lot more haha. Maybe a bit of takeaways, a bit of fast food. But that’s it pretty much.”

You’re fighting at such a high level at such a young age, what are your goals in Muay Thai for the next few years?

“I wanna make a career out of it, aim for the top, go as far as I can. I wanna fight in ONE Championship, that’s one thing that’s like my ultimate goal.”

Did you see the Nieky Holzken vs John Wayne Parr fight?

“Yeah, yeah his [Parr’s] guard was real open and Nieky just cut through it, he threw a beautiful spinning kick that he landed.”

Is a Muay Thai fight in the smaller gloves something you’d like to do if the opportunity came up?

“Yeah, I’d give it a go, I’d definitely be keen. Having the fingerless gloves, the Thai clinch would be a lot more advanced, you’d be able to lock on a lot better than you can with just the normal gloves. It’d be cool to do.”

Lastly, how do you see this fight against Ale Taumalolo going down?

“Obviously, I’m going for the win, so I’m betting on myself and yeah, it’s gonna be a good hard fight.

“He’s got the experience and that but yeah I’m pretty confident and am looking forward to it. It’s just a bit of paper at the end of the day, your record and that.”

Thanks Travis, we wish you all the best this weekend.

VIP tickets to the event have sold out, but there are limited GA tickets available from Eventfinda. If you can't make it to the show, register an account on Fight News to catch the PPV livestream from this link. 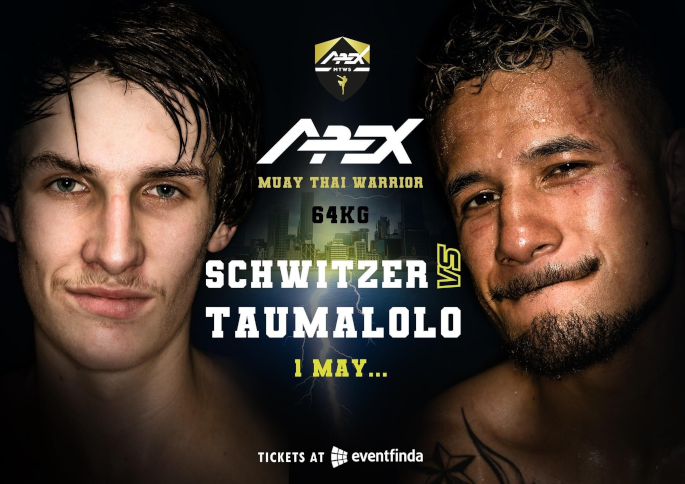