Macca Jean looking to avenge her only loss

Macca Jean is quickly establishing herself as a force to reckon with, recently winning the WKN MMA New Zealand 70kg title in her MMA debut at Born to Fight 9.

The 20-year-old has been training for 11 years. She started Taekwondo when she was nine years old in her hometown of Opotiki, switching up her training at the end of 2018 to boxing.

Since then, she has racked up a 21-fight count across boxing, Muay Thai, and MMA, with only one loss to her record.

Firstly, congrats on your recent title. That was your first MMA fight, did it go the way you thought it would?

“Thank you. I stuck to my game plan, but it was frustrating because I am a go-forward fighter. It did go the way we wanted it to - I only ended up on the ground once.

“I’ve been doing Jiu-jitsu for the past year and started training for the fight eight weeks out. During the camp I injured myself which took me out for about a week. It was a long camp, mentally.”

It was your first MMA fight; would you have ever thought your debut would be for a title?

“I forgot I was fighting for a title! Well, I knew, but it wasn’t important. At the end of the fight when they gave me the title I was like ‘Oh yeah!’.

“It’s crazy, I would have never thought I would end up fighting for a title for my first MMA fight. It was cool.” 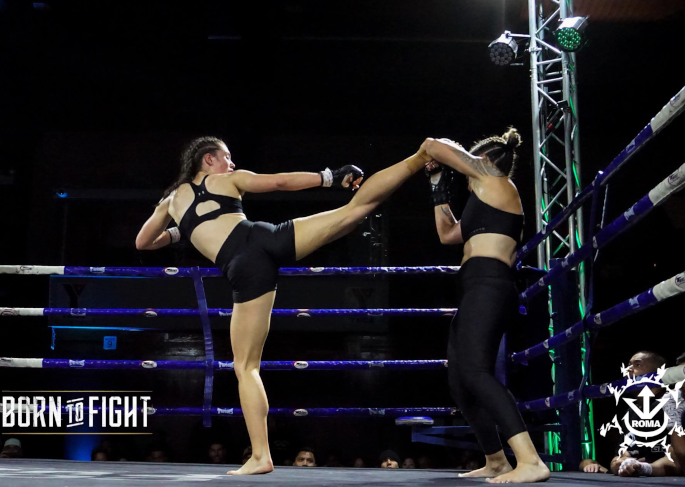 You’ve fought over 20 bouts in the past 2 and a half years, across boxing, Muay Thai, and MMA. Do you have a favourite discipline to fight?

“I haven’t done much MMA, but from last fight I really enjoyed it. Every style has something different that I enjoy.

“Muay Thai has been fun and there’s lots to learn, I’ve been working on the clinch recently. Muay Thai is so different to Taekwondo, some kicks work but there’s small differences like how you turn your hip over.

“Even setting up kicks with your hands - it’s a whole new sport. I enjoy it all, whatever is there I will take the fight.”

In terms of fight mentality, what drives you to be such an active fighter?

“I just love it. I feed off my nerves. When some people think ‘Oh gosh, I have a fight’, I think ‘yeah!’. There’s nothing else I do, and I want to make the most of it.

“I want to go for the highest titles I can get to. I’m lucky that I don’t work outside of training anymore, I’ve got awesome sponsors which help me keep my focus on training.

“When I’m no longer fighting, I would love to coach. I want to stay in the fight game for as long as I can.”

“Definitely. I want to, but my coach is like hold up! At the moment I am focussing on Muay Thai and MMA. Eventually, you’ll definitely see me out there.”

What other fights have you got planned this year?

“This weekend I’m doing No Gi which is the Jiu-jitsu Nationals. I’m fighting Kelly Broerse on 22 May.

“I’m lining up fights for June and August, but nothing is confirmed yet. Hopefully I’ll get over to Australia later in the year.”

“I’d really love a rematch Melody Downs. She is my only loss, and I don’t like losing. I don’t really have a hit-list; I want to fight whoever, whenever it comes up.”

Thanks for the interview Macca. Best of luck in the grappling comp this weekend!