Action gets underway at 5pm.

Fight fans and fighters alike will be counting down the hours until the second instalment of Apex Muay Thai Warrior Series.

The hard-hitting action will get underway at Urban Sport Gym in Birkenhead, Auckland, at 5pm.

The event, which is to be broadcast on Fight News PPV, hosts the semi-final round of the 64kg division in addition to the preliminary round of the 80kg division.

The Apex Muay Thai Warrior Series is a professional fight league designed to give the best New Zealand fighters a chance to earn real money in Muay Thai.

The event is setup like an eight-man tournament, with each round on a separate event. This gives fighters the chance to fully recover in between fights, which is especially important given the prevalence of cuts under Thai rules.

The way the prize money works is that it is paid only to the winners, with each fighter who wins a preliminary bout granted $2000, every semi-final winner $3000, and the winner of the final of each weight division getting $4000.

The fight that most fans are looking forward to sees newly crowned King in the Ring Rob ‘El Hurto’ Horrocks face Muay Thai assassin Yassin Yass. Will the power of Horrocks or the elusive style of Yass prevail?

Schwitzer stopped his opponent in the preliminary round, but Taumalolo is a veteran with a lot of tricks up his sleeve.

The 80kg bracket boasts a stacked line-up of elite New Zealand bruisers, all eager to climb the Apex ladder and get a shot at the prize money.

One of the most experienced fighters on the card, Urban Sport Gym's Chris Eades will face surging New Zealand champ Deej Edwards, fighting out of Jackals Martial Arts.

A slight change has been made with the fight involving Young lion Haamiora Parsons-Grace.

He was scheduled to take on Dunedin Kickboxing's Tony Funke, but Funke suffered a knee tear in sparring during preparation for his fight, which forced promoter Greg Nesbit to find a late-notice replacement.

Rehua Smallman has answered the call for a replacement fighter.

Fighting out of Alpha Muay Thai in Porirua, 38-year-old Smallman is a 20-fight veteran, winning a WKA South Island title in 2018.

Mandela Ale looks to make a statement in his bracket as he faces Dan Hooker protege Nate Law.

VIP tickets have sold out, but there are a few GA tickets left from Eventfinda. If you can’t make it to the show, it will be broadcast on Fight News PPV. Register your account and subscribe to the event here.

The full fight card is given below: 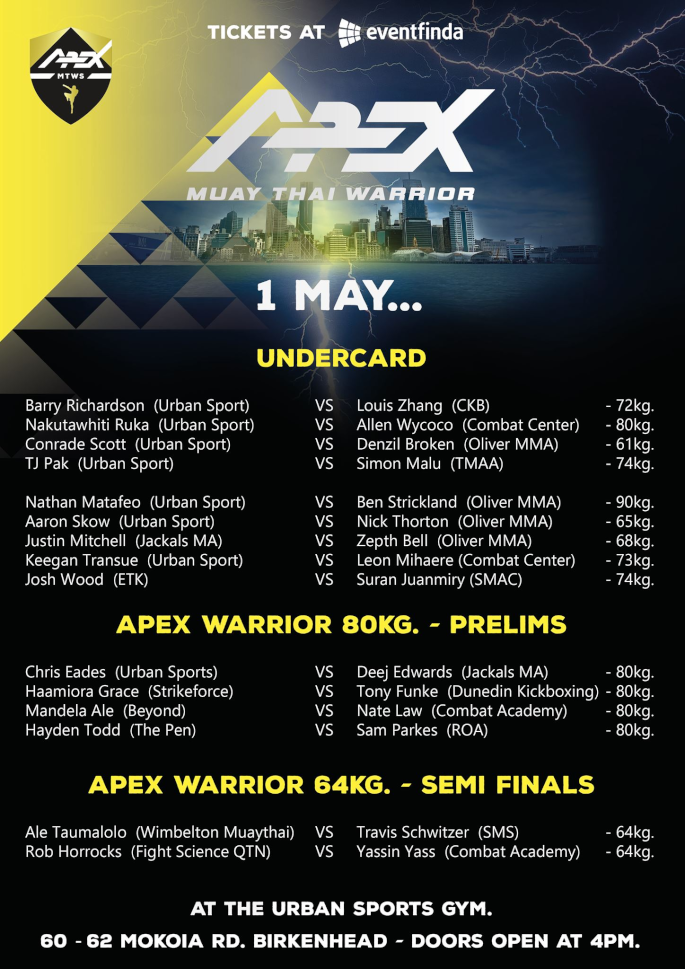 **Rehua Smallman is taking the place of Tony Funke in the fight against Haamiona Grace in the 80kg prelims.