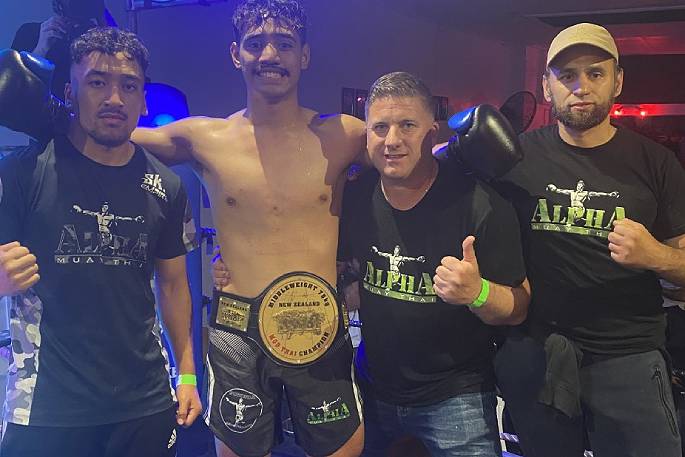 Bailey Vitaliano with his title following his win at TMT. Supplied photo.

While Bailey Vitaliano may be a rookie in the combat sports world, but the 21-year-old has his sights set on King in the Ring.

Vitaliano took on local favourite Levi Rangi for the  WKBF LHW NZ Title at TMT in Hamilton on April 24.

The Alpha Muay Thai fighter spent the first round feeling out his opponent, landing some well-timed and well placed calf kicks throughout the round.

Rangi came out swinging in Round 2, but the damage had been done already and Vitaliano managed to drop his opponent three more times before referee Chris Samson waved the bout off, declaring Vitaliano the winner and new WKBF NZ champion.

Heading into the fight, Vitaliano, who had his first Muay Thai fight in 2019, admits he was scared and not sleeping properly.

"It wasn’t until I got to the fight venue on the night, that I stopped being nervous and realised I've put in too much work to lose, automatically was pumped and just wanted to go in and finish the fight."

Walking into the venue in Hamilton, Vitaliano says he had a feeling he would walk away with the win.

"I never felt so sure of any of my other fights before. We had a plan to out smart him since he was so technically sound with his kicks and punches. And I knew I had the ability to finish the task at hand."

When asked how it felt to raise the title, the 21-year-old says "it still hasn't sunk in yet".

"Honestly still hasn’t settled in. It felt good for sure though. Especially because of my family that travelled all the way to support me, and all the hard work my coaches put into me."

Vitaliano describes himself as a "rookie with tunnel vision, going through the motions and taking on any fights my coaches offer", but he has big ambitions in his sights.

"I would love to fight on King in the Ring, but got a lot to work on before then.

"Wouldn’t decline the offer if it was given to me anytime soon though."