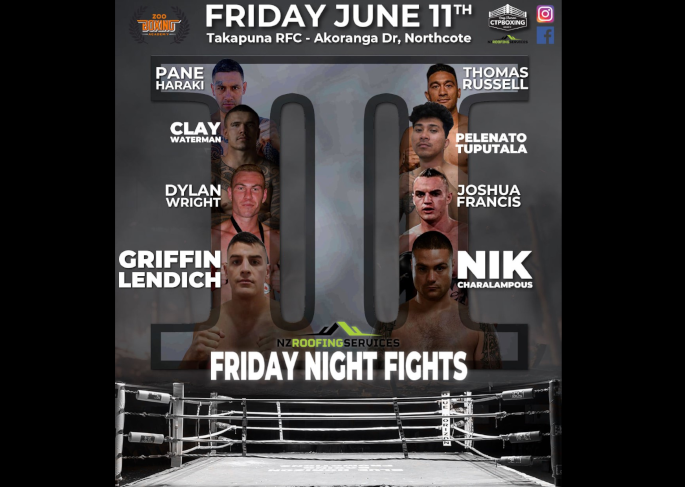 Headlining the event will be a light heavyweight clash between Peach Boxing's Dylan Wright and professional debutant Griffin Lendich. The professional portion of the card will consist of four bouts and will also see two of NZ's highest-ranked cruiserweights, Nikolas Charalampous and Joshua Francis, stepping back into the ring against Thomas Russell and Ben Benjamin, respectively.

Event promoter Craig Thomson is excited about the card he has put together and credits the fighters for always being willing to step inside the ring and showcase their skills.

"They [Charalampous, Francis] always want to fight and progress their career from that point of view. They are easy to put on. It's just obviously matching them up as best we can to get good fights and hopefully entertain the crowd, " he said, speaking to Fight News.

"We got there in the end, and I am happy with how it worked out."

Thomson has also scored a massive coup by securing a matchup for Australian light heavyweight Clay Waterman,  a 2011 Junior World Amateur Champion, and one of Australasia's most promising young fighters.

"Clay is definitely a ticket item in terms of boxing people, they know Clay. They know his ability. I am hoping we can show him off to the general punters in NZ and let them have a look at what's a pretty handy talent," Thomson explained.

"It is a great opportunity to see him up close and personal in a nice intimate venue like the Takapuna rugby club."

Thomson has been part of the New Zealand boxing scene for 17 years and firmly believes that our local fighters have what it takes to compete on the world stage, provided they get the right opportunities to develop their skillsets.

"We have always got the talent here in NZ to produce world-class fighters; that has never been the problem. The problem has always been [creating] a real strong pathway and getting the guys busy, keeping them active, keeping them engaged.

"For a lot of these guys, they do the sport, they see it possibly as a long-term career, but they also do it because they love it. It's a passion, they enjoy the sport, but it's like any sport. If you are not playing or engaged or doing it, you soon start losing interest."

Events like Friday Night Fights III help ensure that our fighters have a platform from which to showcase their abilities and build their records. However, Thomson is never one to rest on his laurels and already has plans for the rest of the year.

" I will get Friday's show done, and that is the first part of the year complete. The second half is looking to going to the regions and taking a few shows outside of Auckland. "

Kaitaia, Waipu, and Napier are the locations Thomson intends to stage events in, with the Kaitaia show set to be headlined by rising star Mea Motu, which will be a homecoming for the NZ Lightweight Champion.

The shows will help the new generation of up-and-coming fighters get the experience and exposure they need in order to further their career development.

"The talent is there. It's just trying to get the help, so they can all rise in hopefully the right direction, which is upwards," Thomson said.

If you are keen to head along to CTP's Friday Night Fights III, tickets can be purchased at https://events.ticketbooth.co.nz/