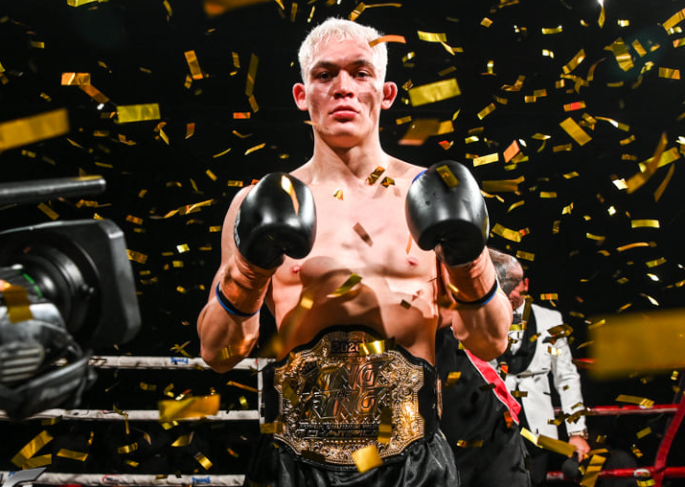 Navajo Stirling after being crowned the 92kg King in the Ring in 2020. Photo: Calden Jamieson.

Navajo Stirling will attempt to be the third fighter from the famed City Kickboxing Gym to become a two weight KITR champion this Saturday in Auckland.

The reigning 92kg champion, who dominated the last eight man contest in December, steps up in weight, following in the footsteps of three-time champion Israel Adesanya and two-time king Carlos Ulberg.

The 23-year-old, who fought out of the Wellington's Lion Pit at his last appearance, shifted camps in March to the Auckland based camp to pursue his UFC dream.

"For the past few months I've been sparring with a murderer's row of champions including Israel, Carlos, Blood Diamond (two time KITR winners) and Davor Matarugic (former 92kg champion).

"It’s great to have a so many highly skilled big guys to learn from and sharpen my tools."

Stirling has been working with former K-1 Las Vegas Champion and boxing olympian, Doug Viney, who will corner him on Saturday at Eventfinda Stadium.

"Doug's great, he's no nonsense in his approach and has really sharpened up my hands, which I plan on putting on display."

Viney was the key architect behind Junior Fa's strong performance against Joseph Parker in December 2020 and see's great potential in Stirling.

"He's young and has real potential to learn because he's still pretty inexperienced fight wise, but we'll just take it one step at a time."

Stirling is the favorite in a field which features six current or former national champions including three time finalist, Nato Laauli and former world champion Pane Haraki, who have had 38 and 37 professional bouts respectively.

The undercard is also compelling featuring the comeback for former KITR and world champion Victor Metchov in a super fight and the women will also be in full cry with veteran international fighter Wendy Talbot taking on talented up and comer Aisha "Baby Mumble" Abied in a hotly anticipated rematch.