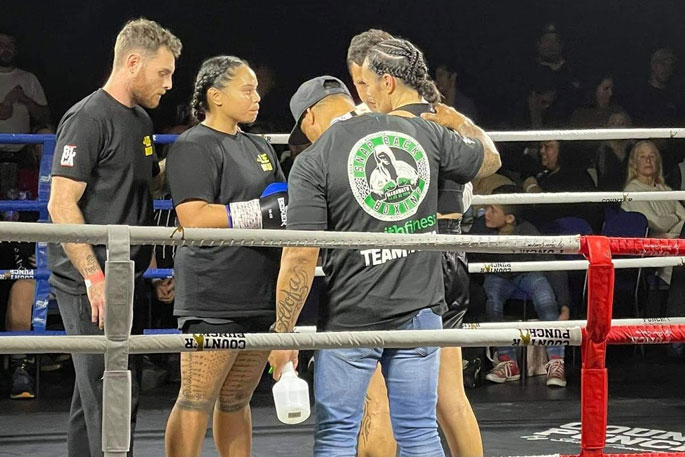 Meleisea’s loss has sent shockwaves throughout the boxing community.

The world-ranked boxer now has a record of five wins, one loss and one draw.

She is ranked third in the WBA and eighth in the WBC.

She was ranked third on Boxrec, but now is ranked fifth, behind Sequita Hemingway.

Meleisea took New Zealand by storm when she made her debut in 2016.

She captured her NZ heavyweight title and successfully defended it in 2017.

Since then, Meleisea has been mostly inactive, reports boxing commentator Benjamin Watt.

“She made her return in 2019, where she drew with former rival Sarah Long and defeated now-retired boxer, Ashley Campbell.”

Covid had a major impact on the fight community last year, with many bouts either cancelled or postponed.

Watt says she was taking on another professional athlete in Sequita Hemingway.

Hemingway is a New Zealand professional rugby player, who plays for the Manawatu Cyclones.

The Cyclones are part of the Farah Palmer Cup.

Last year the Cyclones won four out of their five games, coming second in the season standing, before losing in the semi-finals.

Hemingway, who plays prop for the team, only started boxing this year.

She has had multiple corporate boxing fights, which she has won, says Watt.

“But apart from her corporate fights, she has had no amateur boxing experience.

“A lot of people thought Meleisea this fight would be just a simple warm-up match.

“However, for those who don’t know much about rugby, they are extraordinary athletes who can play a game for up to 80 minutes.

“So Meleisea might have the boxing experience, but Hemingway had the height and the athleticism.”

Hemingway boxed like she was boxing for years in the first round of the bout.

“Simply jabbing on the outside, moving around the ring and when Meleisea got too close, both boxers let their hands go,” says Watt.

“Hemingway clearly won the first round by just out jabbing her opponent.”

In the second round, the first 30 seconds of the broadcast feed was cut, but it seemed that Meleisea was in control, landing some heavy shots, and putting the pressure onto Hemingway.

Watt says in the last 30 seconds of the round, Hemingway was keeping Meleisea away with her jab.

Meleisea seemed to be waiting too long to actually do something, says Watt.

“Going off what the commentators were saying, as we missed that first 30 seconds, I would say that was an Alrie Meleisea round.

“The third round was very similar to the first round. Hemingway controlled the fight, keeping Meleisea away with her jab.

“Meleisea landed more this time than she did in the first round, however, it was another Hemingway round.”

The last round was a much closer round.

Watt says both girls let their hands go at the beginning and it seemed Meleisea had the better of the exchange.

“But Hemingway went back to boxing Meleisea and out boxing her.

“When Meleisea got too close, Hemingway landed a nice right hand.

“In the last 20 seconds, the women let their hands go again but this time Hemingway had the better of the exchange. Closer round, but I would say Hemingway won the round.”

At the end of the fight, MC Isaac Savage announced Sequita Hemingway as the winner by majority decision.