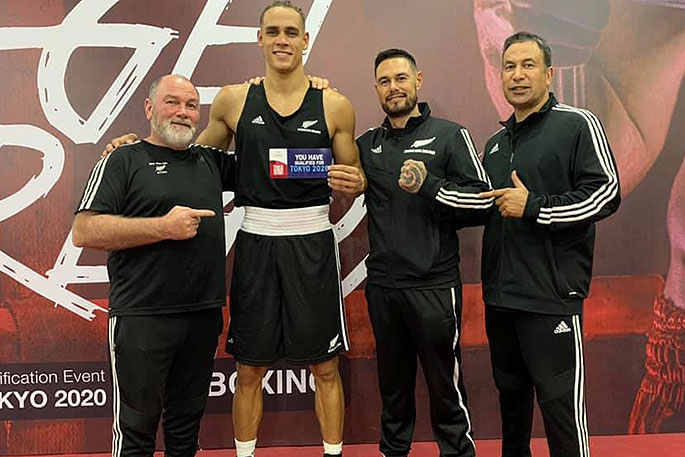 David Nyika is taking a sterling list of boxing achievements with him, as he chases his Olympic Dream at the XXXII Olympiad, which kicks-off in Tokyo Japan this Friday.

Few Olympic Games have garnered more attention outside the sporting arena, than the 2021 Olympics.

The games are finally being staged, albeit amongst some controversy, after being postponed in 2020 due to the Covid-19 epidemic still sweeping the world.

He is likely to receive a high seeding position and will draw a bye in the first round of competition.

David Nyika is set to become the 31st Kiwi boxer represent New Zealand at the Olympics, since Charlie Purdy made his entrance at the 1924 Olympic Games held in Paris, France.

New Zealand has won a trifecta of Olympic boxing medals.

It would be 56 years before Kevin Barry would return home from the 1984 Los Angles games with a silver medal, followed by David Tua claiming a bronze medallion at the 1992 Olympics.

Nyika is entitled to be ranked as one of the best amateur boxers to be produced in the country.

The Waikato-born pugilist has a huge background of international experience, which started when he fought in the 2011 ABIA Junior and 2012 AIBA Youth World Championships.

He is the only Kiwi boxer to win two Commonwealth Games Gold medals, claiming Light Heavyweight glory in 2014 in Glasgow and then backing up on the Gold Coast Games in the Heavyweight division in 2018.

He has also fought at two AIBA World Championships, reaching the quarter finals in Hamburg during 2017 and the last 16 at the 2019 Yekaterinburg event.

Nyika's long road to Tokyo kicked-off in 2019, when Boxing New Zealand undertook an extensive international program to give a group of elite New Zealand boxer’s overseas competition, before the Asia/Oceania Olympic qualifying tournament in early 2020.

The Waikato boxer won gold at the Trans-Tasman Super Eight, which was just the entree to the Felix Stamm International tournament in Poland.

Victories over Russian and Indian opponents in preliminary competition saw him advance to the title decider, where he beat a Polish fighter, and also won the boxer of the tournament award.

A bronze medal at Boxam Valencia also anchored Nyika's 2019 international program, as he set his sights on Olympic qualification the following year.

New Zealand Olympic qualification became so much harder after Oceania lost their qualification spot and were thrown in with the Asia region.

First-up in the 2020 Olympic qualification tournament, Nyika dispatched a Syrian boxer before defeating an Uzbekistan opponent. Thus qualifying him for the Olympics.

He then squared off with a Kazakhstan fighter in the tournament final, losing a narrow decision, but gaining plenty of accolades against the 2016 Olympic silver medalist.

David Nyika will be the sole kiwi in the Olympic ring,  after the last-chance qualification tournament in Paris in May 2021 was cancelled due to Covid -19.

The cancellation denied any other New Zealand boxers the chance to join Nyika in Olympic competition.