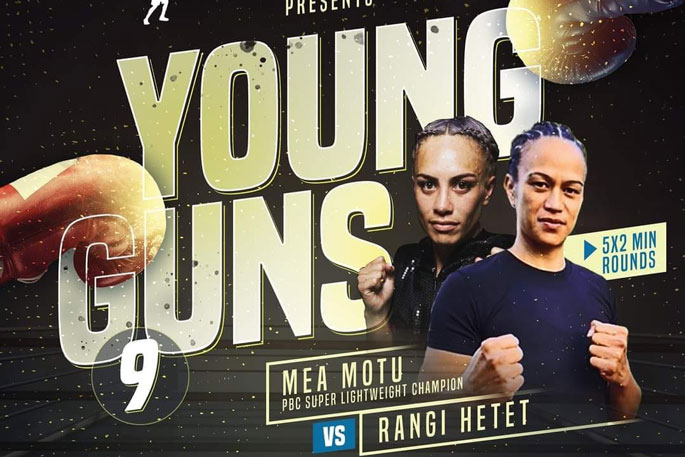 Mea Motu has a busy 2021 schedule this year.

She will be facing Rebecca Hawker in a Australasian fight in September, before fighting in a Kaitaia homecoming in November.

She will also face Gentiane Lupi for the WBU World title fight in November.

But first, she must get through the tough Rangi Hetet at the Te Rapa Racecourse in Hamilton on August 7.

One of New Zealand’s fastest rising stars in boxing, Mea Motu has been very busy since making her debut in October 2020.

It has not even been a year since her debut and already she is undefeated with nine wins, four of those by knockout. She is also a multiple division New Zealand champion.

Motu won her first New Zealand title in March, when she faced Tania Reid for the NZPBA lightweight title.

In an interview with “Mr Controversy” Benji Watt, Motu says the reason for fighting in multiple divisions is due to the lack of female boxers wanting to fight her in New Zealand.

One thing that both Mea Motu and her trainer/manager have said, is that they have been frustrated with the number of people trying to avoid their fights.

Motu wants to be known as the best boxer in New Zealand.

She has said herself, that to become the best, you need to beat everyone, but not everyone wants to fight her.

Some of the names she has listed off that she wants to take on in New Zealand include Gentiane Lupi, Baby Nansen, Troy Garton, Karen Te Ruki Pasene and Ariane Nicholson.

But before she gets to them, Motu will be taking on the Hamilton boxer Rangi Hetet on August 7.

For those who don’t know Rangi Hetet, she is a former amateur boxer that was most active around 2016 and 2017.

She made her professional boxing debut in June against kickboxer Miriata Callaghan.

Watching the fight between Rangi and Miriata, there are only two words you can describe Rangi, and that is TOUGH and FIERCE.

She took to her opponent and won every round of that fight on debut.

When Mea Motu was told how tough Rangi was, she said “Good, bring it on”.

She is ready to take on all comers.

Mea Motu is ranked number one in New Zealand in the Super Featherweight division but fights at all weights under Super Welter.

Rangi Hetet also is ranked number one in the Super Welter division which brings an interesting match.

Dion McNabney, promoter of Young Guns 9 where the women will go head-to-head, will be putting an elite amateur card together, showcasing Waikatos best amateur boxers from Cadets, Juniors, Youth and Elites.

The amateur session will start off the event at 1.30 pm with 21 fights, before moving on to the corporate and professional side at 5pm.

McNabney has just come off a successful tournament in Taumarunui, with five of his boxers walking away with gold and four of them coming home with the silver.

McNabney will be bringing some of his greatest fighters to his show on August 7 at Te Rapa Racecourse.