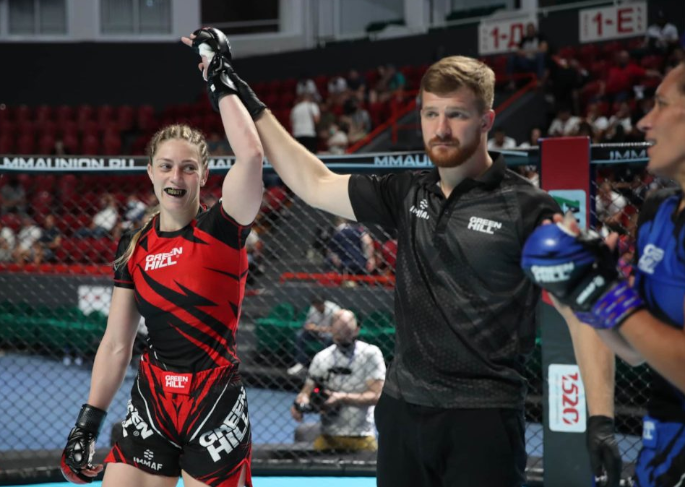 Michelle Montague has advanced to the semi-finals of the women's featherweight competition at the International Mixed Martial Arts Federation's European Championships, following her victory over Russia's Elena Vetrova.

The current women's lightweight world champion, Montague, debuted in the featherweight division overnight when taking on Vetrova in Kazan, Russia. The 27-year-old Matamata born fighter used the opening frame as a feeling-out process before exploding at the start of the second round.

After taking Vetrova down in the first minute of the second stanza, Montague quickly worked her way to full mount position before unleashing a series of heavy shots, forcing the referee to call a halt to the contest. It was the type of performance that people have come to expect from Montague, who is ranked No.3 in the IMMAF's pound-for-pound list.

Montague is in fine form at the moment, having chalked up a recent win in June over Australia's Erin Carter, and is one of New Zealand's top MMA prospects. Her bout with De Sousa is one of the most anticipated amateur MMA bouts of recent memory.

The 21-year-old Brazilian-born fighter, who began training in martial arts as an eight-year-old, moved to Bahrain to join their national squad run by Dagestan's Eldar Eldarov. The move has seen her merge her Brazilian Jiu-Jitsu background with Dagestani wrestling techniques.

However, De Sousa knows she faces a challenging task in Montague. The CORE MMA and City Kickboxing trained fighter is a noted grappler and was a former New Zealand Wrestling squad member. The Kiwi fighter will have the height advantage and is the more experienced of the two, but De Sousa is a slick fighter on her feet, and it will be interesting to see if she wants to tangle with Montague on the ground.

The winner of this clash will move onto the final to face the winner of the second semi-final between Russia's Alena Agisheva and Greece's Christina Papasotiriou.

If you are keen to follow Montague's progress in the tournament, then head on over to  IMMAF.TV,  you will also be able to see a full replay of her win over Vetrova.