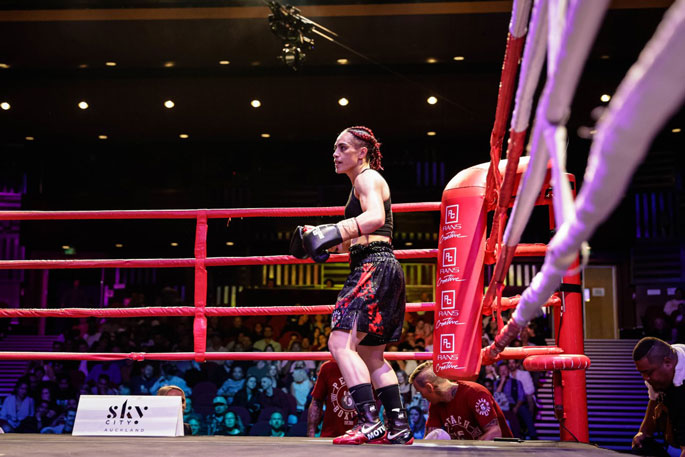 New Zealand Light and Super Lightweight Champion Mea" The Nightmea" Motu has returned to the gym and is gearing up for a busy start to 2022, after Auckland's Delta outbreak temporarily put her boxing ambitions on hold.

Before the outbreak struck, Motu, who only turned professional in October 2020, was one of the most active fighters in world boxing, recording 10 straight wins in 10 months.

The Kaitaia-born boxer has confirmed she is set to return to the ring on February 12 and will be chasing her third NZ title when she faces Ayisha Abied for the vacant NZPBC featherweight belt.

"I got used to fighting nearly every month, which I loved and enjoyed, but now I just can't wait to get back in the ring, and hopefully the world opens up very soon," Motu says.

"Next year is going to be a big year for me, so I'm excited. I definitely will kick off with a big bang. So back in the ring in February."

The 31-year-old, who trains out of West Auckland's Peach Boxing Gym, has been watching her overseas rivals closely and is keen to test herself against the world's best once NZ's travel restrictions become less stringent.

"I was gutted about that, not being able to fight Bec Hawker, because that would have been a good match between both of us, and it would have shown my skills and that I'm ready for the international stage."

She has been nominated by Women's Fight News for Newcomer of the Year and she is being talked about even in locations as far afield as Mexico. where some of the best female fighters in her preferred weight class of super bantamweight reside.

Motu's team has connections in Mexico, and a matchup between her and one of the top Mexican super bantamweights is a distinct possibility in 2022.

"As soon as those borders open I am ready to take a shot and take on those titles," Motu explains.

During this enforced break in her career, one silver lining is that it has given her time for her new walkout song to be completed.

The track was written and performed by her cousin Destry Ryder-Motu, and carries a huge amount of meaning for the mother for five.

"It's not just a song to me. When he sings, that's mana for me, and I am carrying my tipuna and everyone from my hometown. When I walk out to the ring, that's my family from Pukepoto, up in Kaitaia. I walk out with my head high and strong and happy to go in there."

If all things go to plan, 2022 could indeed be a "nightmea" for those willing to step into the ring with one of NZ's top prospects.