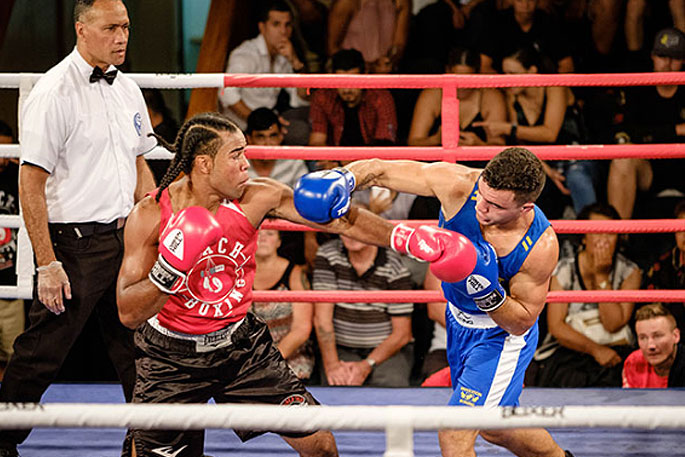 This year similar to 2020, we have had a tough year with lengthy lockdowns and a lack of active events across New Zealand.

Despite having long lockdowns, New Zealand has managed to have 24 boxing events with professional fights and more than 55 amateur fights.

Here are the award winners this year and why:

As we all have had trouble having boxing events this year, Jerome has managed to keep busy with nine fights in 2021. What is also remarkable is the fact he fought two pro fights in one night on December 11. That is generally only been seen in eight-man tournaments but for Jerome, he did it to keep busy and improve his record. Jerome is a boxer that New Zealand Boxing should be proud of, keeping busy, improving his rankings and willing to take on all comers. We hope to see Jerome fight in the new year against John Parker for the NZ title.

With his victory over Junior Fa and fighting twice this year against Dereck Chisora, he is certainly a contender for a boxer of the year, however, as we all know, the higher he climbs in the ranks, the less we see him in New Zealand.

Successfully defending his New Zealand title against Shay Brock and fighting over in Australia against Alex Hanan. Unfortunately, Covid lockdowns have held Andrei back from being more active, especially when there was a lot of potential big fights both here in New Zealand and over in Australia.

The New Zealand-born boxer that fights in Australia has had a good year this year. He won the Australasian title in July and had a massive win against Mark Flanagan for the Australian title. The only reason why he didn’t win, is due to not fighting in New Zealand. However, he has made New Zealand proud, especially being now ranked in the top 30 on boxrec.

For the second year in a row, Mea Motu has won the Female boxer of the year. There is no questioning that she is the best female boxer in New Zealand today. She fought six times this year, winning two New Zealand titles in two different weight divisions with two different boxing commissioning bodies. She is just one win away from holding the most New Zealand titles in the female division and breaking the record the Daniella Smith holds that is tied with Mea, Geovana Peres and Lani Daniels. Mea Motu finishes 2021 with an undefeated record of 10 wins.

Winning the bronze medal at the Olympics has not happened since David Tua won his own bronze in 1992. New Zealand is extremely proud of him and his accomplishments in the sport. Unfortunately, he might be New Zealand’s last boxing medalist, as boxing may be removed from the Olympics.

Irish boxer Erin Walsh wins this year’s female amateur boxer of the year. She fought six times this year, winning five out of the six bouts. On top of that, she won the New Zealand national amateur championships and the North Island Golden Gloves. She is now ranked number one in New Zealand in her weight division on Boxrec as an amateur. Rumour has it she might be turning pro next year. Last year Erin Walsh was an honourable mention, this year she take the title as the female amateur boxer of the year.

Gym of the year - Peach Boxing

He might not be a newcomer in amateur boxing, however, he made his professional boxing debut this year and already he been in England fighting on a Joseph Parker undercard.

Being ranked second in the world after her debut fight certainly qualifies her for being the best newcomer. Especially winning her first fight against a New Zealand Champion and world-ranked boxer.

The former WIBA World champion and former New Zealand champion hasn’t been in a boxing ring since 2019. She came back to fight a multiple New Zealand amateur champion and won by TKO. Gentiane Lupi is a true female fighting legend.

We have not seen Liam Messam in the boxing ring since 2015, but he made his return this year, winning by unanimous decision on a Nigel Elliott show against Joe Ageli. Liam Messam is due to return to the ring next year.

Isaac Peach is one of, if not, the best trainer in New Zealand today. Statistically, his fighters are the busiest and most successful. That all comes down to the work ethic of the fighters, the gym environment and the work that Isaac puts into his boxers.

This was a tough one to choose as both deserve this award. Both made major contributions over the years, but this year both promoters did three events, both had New Zealand titles on the events and both benefited the boxing community.

It is amazing how much Isaac Peach does for the New Zealand Boxing community. Not only as a trainer and as a promoter, but also as a matchmaker. Not only does he do professional matchmaking for his shows and other shows like P3 Promotion events, but he also does amateur matchmaking for the Auckland amateur events as well.

A retired boxer that turned promoter, promoted her first event this year. Her event had amateurs, corporate and professional boxing. The professional boxing fight of the night was Pikiao Tairua Bracken stopping Arapeta Werahiko in the fourth round. It was a hell of a fight to finish off a great show.

This award is for the fight between two New Zealand boxers. This fight did happen in Australia but they are both New Zealanders. This fight was extremely entertaining from the press conference to the knockout. It had you at the edge of your seat before the bell even rang. This is one of my favourite fights I have even seen, and is well-deserving of this award.

New Zealand-born boxer Floyd Masson defended his Australasian title against Mark Flanagan, who put up his Australian national title on the line. This was one of the best of the year, matching Tyson Fury vs Deontay Wilder. It was a close fight, however, Floyd Masson took home the titles by split decision.

Floyd Masson won the Australasian title against Australian Joseph Liga in July and then successfully defended it against Mark Flanagan recently. He is now ranked high enough that he can be an international contender.

Referee of the year - John Conway

John Conway is one of the best referees in New Zealand. This year he has been busy with refereeing Joseph Parker vs Junior Fa, Mea Motu vs Tania Reid, Ariane Nicholson vs Genah Fabian and many many more.

Judge of the year - Darcy Williams

Aside from myself, of course, Darcy Williams is the best judge in New Zealand. This year he has also been busy being both judge and referee across New Zealand. One of the most noted fights he judged this year is Nikolas Charalampous vs Joshua Francis for the New Zealand title. However, that fight ended early.

MC of the year - Isaac Savage

Isaac Savage has come so far since his first time being MC. Now that Dan Hennessey has left for Australia, Isaac Savage is the top man for New Zealand announcing.

Commentator of the year - Dale Husband

Another man who is an MC, as well as a commentator is Dale Husband. He is a very good commentator and communicator. He is entertaining both in the ring as an MC and on the table at ringside. He gives both jobs that extra style that makes things entertaining.

This is probably the last time I would be awarding myself this as I have decided to do less each year. I always put everything into the sport of boxing including editing boxrec, Judging corporate, amateur and professional fights, editing Wikipedia pages, writing articles, running backstage at shows, commentating for gladrap, running a non-profit LGBT boxing organisation and many many more. I could go on and on with all the work that I do and most times get little in return.

With the number of hours, money and time that went into this event, it is well deserved to get this award. Especially since it was an all New Zealand show that was televised all across the world. Of course, it was extremely entertaining for people to boo the announcement of the lockdown that was put in the next day.

Most entertaining boxer of the year - Andrei Mikhailovich

He is the most entertaining boxer in New Zealand. He has personality, he can talk, he can sell well and he can deliver. He has a massive future and I believe he is a future world champion.