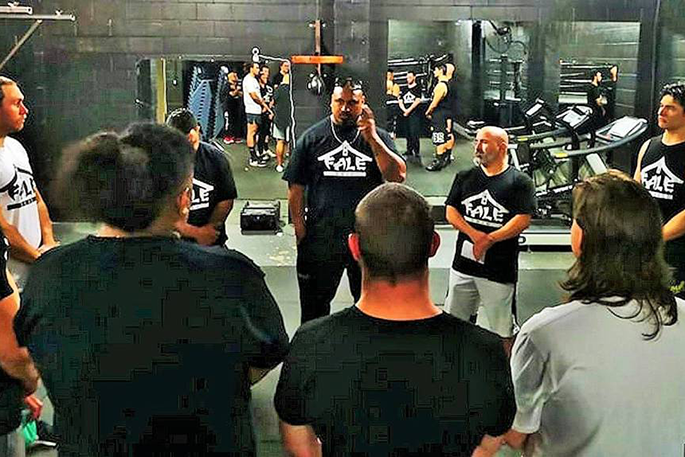 Toks Fale with other trainers at the Fale Dojo in Auckland.

Lion’s Roar is a weekly docuseries that follows young hopefuls of the NZ Dojo professional wrestling training course as they compete for a prestigious contract with New Japan Pro-Wrestling.

Toks Fale, Head Coach of the NZ Dojo and Executive Producer of the series, developed the concept of Lion’s Roar.

“After the first few intakes, I realised how tough it was for the trainees mentally and physically to go after their dreams of becoming wrestlers,” says Toks Fale.

Since the Dojo’s inception in 2016, students have travelled locally and from all over the world to be mentored by Fale and his coaching staff. In chasing their goals, the students must learn to live and train together.

“This inspired me to show the world the battles these trainees have to go through. The viewers can expect to get a glimpse into the world of NJPW behind the shows.”

Joining Toks Fale in leading the hopefuls through the rigorous and intense training is his coaching staff of the NZ Dojo. The coaches include Tony Kozina (Pro-Wrestling Head Coach); Mark Tui (Coach, Dojo graduate); and Tangi Ropati (Strength & Conditioning Coach).

The intake is made up of students from parts of NZ, Australia, and the United States. The experience of the collective is further enhanced by their diverse cultures and backgrounds.

Lion’s Roar is produced by Tusitala Media Ltd and One Island Films. The production team consists of Will Voigt (Executive Producer) alongside Toks Fale, Danny Aumua (Director and Producer), and Hans Masoe (Producer).

The Dojo is an official part of the New Japan Pro-Wrestling (NJPW) training system, known internationally as NJPW NZ Dojo.

Founded in 2016 by Head Coach Toks Fale, Fale first came on to the wrestling scene as the first non-Japanese young lion to train through the entire New Japan Dojo in Tokyo in 2009 before making his NJPW debut on 4 April 2010.

Known professionally as the “Rogue General” Bad Luck Fale, his status was elevated in 2013 when he became one of the founding members of Bullet Club.

Regarded as one of the hottest faction in pro wrestling,

Bullet Club has maintained its dominance in the wrestling world for a decade, due partly to Fale’s reputation as the Club’s revered enforcer.

Toks Fale’s passion is to give back to his community.

He envisioned Fale Dojo as a way of sharing his experience and knowledge with the goal of presenting professional wrestling as a viable career opportunity.

From there, they can pursue the opportunity to gain a spot on the NJPW roster.

The chance to gain Fale’s insight has drawn in many locals, as well as attracted students from all over the world.

As a local fitness facility, Fale Dojo is equipped to offer a wide variety of classes in BootCamp and Boxing to the public aimed at building up people’s fitness, their self-confidence, and supporting their journey and personal development.

The trainers are experts in their disciplines who relish the opportunity to pass on their knowledge and understanding.

The Fale Dojo coaching staff reflect New Zealand’s rich and multi-layered cultural identity; they are equipped and ready to welcome people from all walks of life.