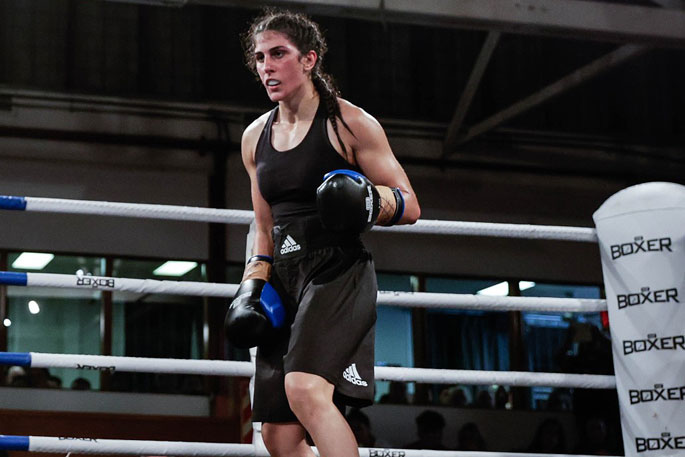 Beyond Muay Thai's Ayisha "Baby Mumble," Abied is one of the most active fighters currently competing on the New Zealand combat sports scene.

The Palestinian's fearlessness and competitive spirit have earned her the reputation of someone who thrives on challenges.

Troy Garton, Wendy Talbot, Nyrene Crowley, Gentiane Lupi, and Mea Motu are all names Abied has crossed paths with over the past 12 months. It is an impressive resume made even more special by the fact that Abied is just 22 years of age.

This Saturday, inside Auckland's ABA Stadium, Abied will again lace up her gloves as she takes on Motu for the vacant NZPBC featherweight title.

It is the third time these fighters have shared the squared circle, and Abied is relishing the opportunity to test herself again against one of Aotearoa's top female boxers.

"My first two boxing fights were with her. It was a good learning experience, especially fighting her where she's had a lot of experience, and she's achieved a lot," Abied says.

"I decided that having a third fight would be another opportunity, especially before she [Motu] goes to the world stage; it would be really good to test myself. I feel like the first fight went well, but the second fight went a lot better, and I keep learning each fight."

Abied, who trains under the experienced eye of Lee Koloto took up Muay Thai at 15 under the guidance of Vinnie Tongalahi at Leegar Legacy.

A decorated Muay Thai fighter, her first love is the art of the eight limbs, and in 2021 she emerged victorious at Wāhine Toa's Winter War II event in the four-woman tournament.

Her first love is the art of the eight limbs, and in 2021 she emerged victorious at Wāhine Toa's Winter War II event in the four-woman tournament.

However, this weekend's matchup presents Abied with an opportunity to claim her first boxing title, and she and her team are leaving no stone unturned as they prepare for Saturday night's bout.

"We are focusing a lot more on boxing and learning a lot of different stuff. It's definitely an eye-opener for what's to come for the next one. Everything is coming together."

Abied was a familiar name on the television screens of fight fans in 2021. She fought twice at King in the ring and featured on P3's Friday Night Fights and a Peach Boxing card. The aim now is to keep the same energy in 2022.

"This year, I want to keep fighting and taking opportunities as I go, and obviously take more challenges and keep stepping up. Keep showing myself at 100% and showing who I am as a fighter each time I get in the ring, and enjoy myself and be the best I can be."

Women's sport is experiencing a rise in media attention at the moment, and for Abied, one of the highlights of her career so far has been getting the chance to represent her Palestinian culture to an ever-growing audience.

"It's amazing. I feel very proud, especially when I get attention from my family overseas and they're supporting me, and it feels really good that I'm doing my best to bring our country to places like TV or wherever I can and showing that we are there."

Abied's career is still in its early stages, but she intends to base it not around years spent fighting as an athlete but on reaching her own personal markers of success.

" I feel like I want to keep going until I reach the goals that I want to achieve, and that's kind of like never wanting to give up until I get to those goals."

Combat sports fans who have not already done so might want to get used to hearing the name Abied as it is a name that is going to be around for plenty of time to come.

Motu vs. Abied 3 is available on PPV at Fightshow Live.