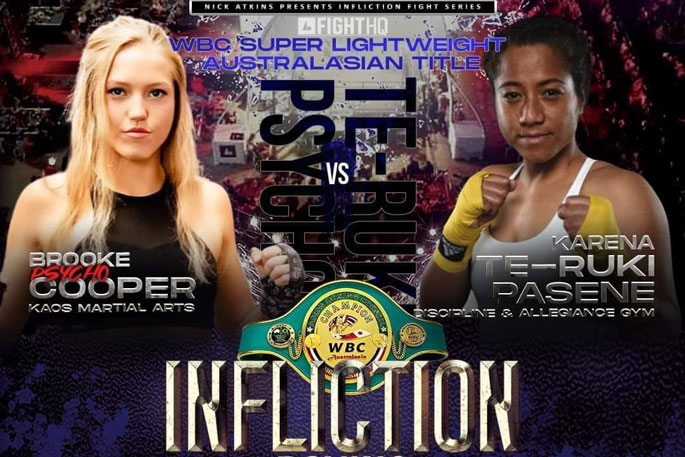 Northland boxer Karena Lina Te Ruki-Pasene gets to step back into the ring after 10 months of inactivity due to Covid and border lockdowns.

She will Queensland to fight Brooke Cooper for the WBC Australasian title in Queensland  on March 25.

Te Ruki-Pasene originally had a massive opportunity to fight at Eden Park, New Zealand's largest outdoor stadium; but the event got cancelled with no sign of the event due to the Covid outbreak in New Zealand.

She is well-known in the boxing community for being tough, especially with her career of being in the Royal New Zealand Navy as an officer.

She made her professional boxing debut in November 2018, after having a background in corporate boxing.

She took on Toni Moki, winning the fight by stoppage.

Her next fight was a massive risk when she took on former New Zealand Champion, former WBA Oceania Champion and former WIBA World champion, Gentiane Lupi, in October 2019.

Lupi had not fought in three years before that fight, but she returned with a split decision win.

Te Ruki-Pasene made her in-ring return to take on the first New Zealand female with the ANBF Australasian title, Tania Raid, for the New Zealand national (PBCNZ version) Super Lightweight title in February 2020.

The fight itself was extremely close, which anyone could have won, but Te Ruki-Pasene had her hand raised for a split decision win at the end of the night.

The country was fortunate enough to have events again later in the year, when NZ came out of lockdown.

Unfortunately, Nasen was too strong for Te Ruki-Pasene, which led to the Northland boxer retiring in the corner after the 7th round.

In May 2021, Te Ruki-Pasene was last in the right, taking on two-time New Zealand amateur national champion, Golden Gloves Champion and gold medalist at the 2019 Arafura Games, Ariane Nicholson.

The fight was extremely close again, but Te Ruki-Pasene raised her hand when the MC announced her th winner majority decision.

This year, Te Ruki-Pasene will be taking on Brooke Cooper at the MXstore in Burleigh Heads, Queensland, Australia.

Cooper's boxing record might only be one win, one lose; but if you combined all her records across fight codes, her record would be 28 wins 13 loses.

The winner of this fight will not only WBC Australasian title but also be ranked in the next WBC women's rankings which will be a big start in the climb for a world title and more international opportunities to fight.